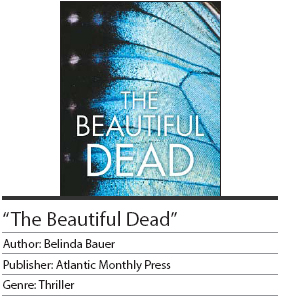 Although “The Beautiful Dead” succumbs to some stereotypes of the serial killer novel, Bauer’s strong character study and sense of place keep the taut plot churning with surprises.

Eve Singer, a crime reporter for London’s iWitness News, becomes a murderer’s obsession when she covers the stabbing of his latest victim. The killer’s gimmick is that he chooses to murder in the middle of a crowd while London’s Christmas shoppers linger on the streets. He poses these victims in gruesome tableaus, considering them “exhibitions.” At work, Eve is being pressured to pursue the story, no matter the cost.

At home, Eve deals with another kind of pressure - caring for her father, whose dementia is escalating.

While the killer’s thoughts often succumb to cliches, making him more of a stock figure, Bauer avoids this trap with her other characters, including the victims, each of whom is shown as a fully realized person.

Eve proves to be a formidable heroine. On the surface, a crime reporter for a tabloid-like network isn’t the most sympathetic, but Bauer delves deep to show Eve’s humanity. She is a serious journalist who is more interested in justice than a story.

The scenes with her father, who raised her as a single parent, realistically show their close relationship, her need to do the right thing by her father and her frustration with his declining health. Readers will also root for Detective Sgt. Emily Aguda, whose petite size belies her mad self-defense skills.