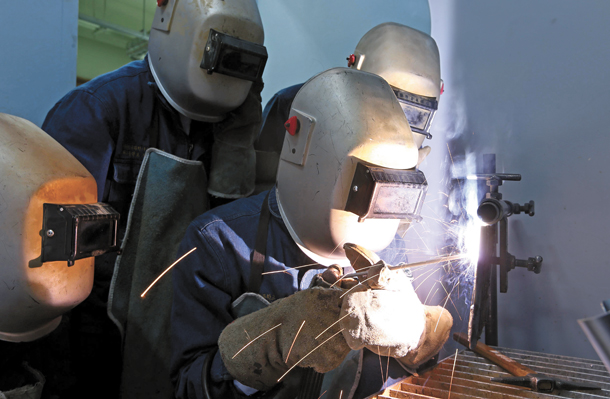 As the labor market continues to remain sluggish in recent years, more students are choosing to study at vocational high schools, government data show. Many students believe that their futures are more promising than if they attend traditional schools that focus on preparing for a college education.

Not only there are more demands for vocational schools, the employment rate for graduates from such schools is improving as well.

The employment rate of vocational school graduates rose for the seventh consecutive year, the Ministry of Education said, from 16.7 percent in 2009 to 47.2 percent last year. The government’s target rate by 2022 is 65 percent.

“It appears that there are more numbers of Korean students who feel that college degrees are not necessary for their careers,” said Choi Won-seok, a director at the Education Ministry. “In the past, vocational schools were mainly divided into two sectors - business schools and technology schools - but there are more types of high schools that teach various subjects such as baking, cooking and robotics.”

In 2009, the government introduced a new type of state-run school called Meister High School, which teaches specific technologies related to the 10 fastest emerging sectors, including semiconductors and robots. The schools are funded by the government and the number of them rose from 20 in 2009 to 48 as of 2016.

Vocational schools are more in demand but the government admitted that the number of students that they are available to educate falls short of demand. Meister school graduates’ employment rate has remained above 90 percent since 2013.

“I think the demand for the Meister schools and vocational schools is growing as there are more students who feel that they won’t get jobs even after they graduate from college,” said Seo Jae-hak, vice principal at Gwangju Management High, a Meister school. “The problem is even bigger for Korean students residing in rural areas. I think this is why there are more students that apply to vocational schools.”

The unemployment rate for Koreans ages 15 to 29 was at an all-time high of 9.8 percent last year, according to the Statistics Korea. There are 435,000 people in that age group without jobs.

“Students will be paid by the government for education fees and this is having more students with great potential to apply to our school. The goal of the school is to have students get a job right after they graduate from our school,” Seo added.

“Ever since I entered middle school I thought about studying at Meister school that teaches construction and related technology instead of going to college,” said Hong Eun-kee, a freshman at Seoul Urban Science Technical High School. “My parents didn’t like the idea but they were finally convinced after I explained them about my future plans and the school’s education programs.”

Lee Jo-bok, principal of the school, said his students will become the construction masters that will represent Korea abroad in the future.

“Our graduates will become the key construction workers representing Korea overseas,” said Lee. “Social views that think college education is necessary would work as disadvantageous factors for our students. But my students will do better [than people who went to colleges] when it comes to adapting in fields since they are trained to be good at that.”

One of the reasons that young college-educated Koreans have a hard time in finding jobs is because there is a high number of people in general who attend universities compared to other countries.

According to the government, 69.8 percent of Korean high school graduates continued their studies at colleges as of last year. Even though the number of college-degree seekers has been declining in the country, the figure is still higher than the OECD average of 41 percent.

“Korean colleges have failed to educate students to become the most talented people, while just having them learn average skills throughout their courses,” said Choi Kyung-soo, a senior researcher at Korea Development Institute. “We need to lower the number of high school students who plan to attend colleges while making colleges strengthen their competitiveness in order to educate students and make them become more talented to be out in the job market.”

The government is looking to increase the number of vocational high schools.

With the lack of vocational education programs, more Korean high school graduates that don’t plan to attend college are nevertheless preparing for the college entrance exam.

In a related vein, an increasing number of high school graduates who fail college entrance exams are choosing to study for civil service exams instead of preparing for another year for college admission.

“More than 3 out of 10 students who come to check out our educational program are high school seniors,” said Park Jung-hyeok, a teacher at G-gosi, one of the largest private education institutions in Seoul that prepares students the civil entrance exam. “The number of high school seniors coming to our institution for counseling rose significantly compared to the previous year.”

More high school graduates started to take the civil service exam instead of studying one more year to get into colleges, as the government loosened the test requirements in 2013. Before 2013, people applying for the level nine exam, or the lowest entrance exam for civil servants, had to take five mandatory subjects, which include Korean, English, Korean history, administration history and administrative law.

But the government made only three subjects - Korean, English and Korean history - mandatory, while allowing applicants to choose two out of five subjects, including sociology, science and math, as additional options.

The trend of young students who are finding college unnecessary is not confined to Korea, as the number of jobs has decreased for various reasons, including automation in factories and offices.

According to an article in the recent edition of The Economist magazine, the share of the American workforce employed in routine office jobs fell from 25.5 percent in 1996 to 21 percent in 2015. And only about 16 percent of Americans think that a four-year college degree prepares students well for a good job.

The Korean government doesn’t have the exact data on whether automation in plants and offices has contributed to lowering the number of jobs available in the country.

Even though the manufacturing sector saw the number of workers drop compared to the past, other sectors including retail, restaurant and accommodation and construction businesses hired more people compared to the previous year. However, such businesses that saw the increase in the number of workers tend to offer more contract or part-time positions.