Over 50% of SME tech isn’t commercialized

Over 50% of SME tech isn’t commercialized 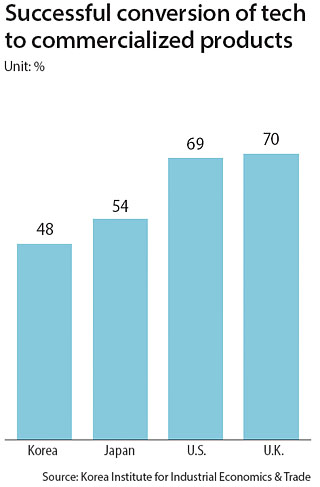 It turns out while technologies developed by small and midsize companies have been successful, more than half failed to be commercialized due to the lack of funding or the market.

According to Korea Institute for Industrial Economics & Trade (KIET), 96 percent of the SMEs that received government funding on research and development between 2012 and 2014 succeeded in technology development. However, only 48 percent of these technologies were actually applied to products that were sold on the market.

This is far below other advanced economies, including Japan with 54 percent, the United States with 69 percent and the United Kingdom with 70 percent.

The KIET study said one of the biggest reasons was because of lack of government funding. The Korean government allocates 95 percent of its R&D budgets in technology development while only 5 percent is spent on commercializing the technologies into actual products.

The government R&D budget allocated for SMEs as of 2014 amounted to 2.4 trillion won ($2.04 billion). But the Ministry of Trade, Industry and Energy only spends 63 billion won on commercializing the technologies including marketing and promotion. The situation is the same with the financial support provided by the Small Business Administration, which spends 800 billion won on technology development but only allocates 10 billion won on the commercialization.

The Korean government’s spending on R&D has been increasing in recent years. In 2013 that budget amounted to 1.05 percent of the country’s GDP, which is higher than the U.S. with 0.79 percent or Japan with 0.75 percent.

But even without the government funding SMEs struggled in commercializing their products.

Among products that were sold in the market between 2012 and 2014 only 17.1 percent were new products or those that saw improvement through technological innovation. Of such products, 28.1 percent were by conglomerates. Midsize companies only accounted for 11.5 percent while small companies only accounted for 6.6 percent; indicating that the smaller the companies were the less new products or newly improved products were actually able to be sold on the market.

Other than the funding, the immature development of markets that could help such innovative products to be reached to consumers was another major obstacle that resulted in SMEs failing to apply their technologies to actual products.

Also, the high costs of newly developed products were another reason technologies developed by SMEs failed to attract consumers, as well as the lack of experts to help market the products.

The report noted a need for the government to come up with policies that could diversify the R&D budget so that it could also help create experts who can commercialize the products, create sales networks and even help these products launch overseas.

“The government, although it is aware of the importance in commercializing the technologies developed by SMEs, it has failed to implement the voices in the fields in its policies,” said Yang Hyun-bong, senior researcher at KIET. “[The government] needs to create policies that would help convert technologies that could actually be implemented in business through systematical field researches.”

The researcher said even if the technology developed by SMEs is outstanding, it becomes a waste unless it actually commercializes.