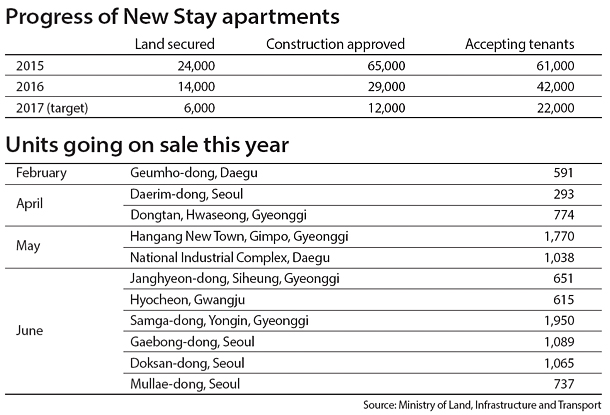 Three years after the first batch of so-called New Stay apartments entered the market in satellite cities surrounding Seoul, the affordable homes will soon be available for rent in the capital itself.

New Stay is a housing program where the government provides land for private construction companies to build apartments. In return, the developers limit annual rent increases to 5 percent or less while tenants can stay for as long as 8 to 10 years.

One of the biggest strengths of the New Stay program is that anyone can participate in preconstruction bids for rental contracts regardless of their annual income and whether or not they have a housing subscription account. These accounts are usually required to apply for apartments before they are built.

New Stay apartments are also open to applicants other than low-income families, unlike other government-supported housing programs, and to those who already own or rent apartments.

In the first half of this year, 3,184 New Stay apartments in four complexes will be accepting tenant applications, according to the Ministry of Land, Infrastructure and Transport. The supply in Seoul is expected to draw particular interest.

The first New Stay apartment up for grabs will be in southwestern Seoul, in Daelim-dong, Yeongdeungpo District. The construction company KCC E&C will be accepting tenants for 293 units in April. The apartments aren’t big - between 29 and 44 square meters (312 to 474 square feet) - but the complex is conveniently located near Guro Digital Complex Station on subway line No. 2.

Then in June, 1,089 New Stay apartments in nearby Gaebong-dong, Guro District, will go on the market, as well as 1,065 units in Doksan-dong, Geumcheon District, and 737 units in Mullae-dong, Yeongdeungpo District. All are in areas of southwestern Seoul that were once bursting with industrial activity. The New Stay apartments in Gaebong-dong, for example, are on the site of a former cement production plant.

“It’s hard to find new land in Seoul, so we decided to build them on ground where old factories have left,” said Kim Sang-moon, head of the New Stay policy department at the Land Ministry.

But if history is any judge, it’s not going to be easy. Last year, the government tried to add a neighborhood redevelopment project in Mia-dong, Gangbuk District, in northern Seoul to the New Stay program. The plan was scrapped in November after opposition from local residents that it would lower the value of apartments in the neighborhood.

“It’s not going to be easy to negotiate the price of apartments since the value of the apartments in redevelopment projects, not only in Gangbuk [northern Seoul] but also obviously in Gangnam [southern Seoul], are high and the relationships between interest groups are complicated,” said Shim Gyo-eon, a professor of real estate at Konkuk University.

Some market analysts say it won’t be easy to attract tenants if New Stay apartments are built around central Seoul or other affluent neighborhoods like Gangnam since landlords will ask for higher rent. The rental contracts on New Stay apartments in Daelim-dong are believed to include a deposit of 10 million won ($8,500) and monthly rent between 700,000 won and 1 million won, depending on the size of apartment.

“Even if [the government] succeeds in supplying New Stay apartments in central Seoul or in Gangnam, it won’t be easy finding tenants that can afford the high rent,” said Park Hap-soo, a senior real estate adviser at KB Kookmin Bank’s private banking center in Dogok-dong, Gangnam District. “They’ll need to raise the deposit and lower monthly rent.”

Park Sun-ho, head of the Land Ministry’s housing and land policies department, said the government will work on drawing cooperation from interest groups and companies in charge of redevelopment projects. It hopes to create a guideline this year that will help increase supply of New Stay apartments in central Seoul.