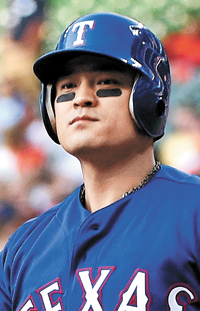 The Korea Baseball Organization (KBO) said Friday it was informed by the World Baseball Classic, Inc. (WBCI) on Wednesday that Choo will not be allowed to take part in the March tournament.

The KBO offered no further details, but the Rangers appeared to have been granted their wish to keep Choo from competing in the offseason event.

The Rangers had earlier requested the WBC organizers to keep Choo and three other players out of the tournament because of their injury history. Choo missed 114 games last year while making four trips to the disabled list. At 34, Choo is entering Year 4 of his seven-year, $130 million contract.

In Choo’s stead, the team selected Park Kun-woo, a rising outfielder for the KBO’s Doosan Bears.

Tokyo has complained to Seoul about a reference to Dokdo as South Korean territory on the latter’s Olympic website, a report said Friday.

Citing multiple sources, Kyodo News said the Japanese foreign ministry has asked South Korea to stop referring to the islets as South Korean territory on the website of the 2018 PyeongChang Winter Olympics.

Dokdo, which lies closer to South Korea in the East Sea between the Korean Peninsula and Japan, has long been a source of tension between the neighbors. This week alone, Japanese Foreign Minister Fumio Kishida told reporters in Tokyo that the islets are Japan’s own territory, calling Dokdo by its Japanese name, Takeshima. The South Korean foreign ministry in turn called on Japan to stop making such “deplorable” claims.

According to Kyodo News, a Japanese government official also pointed out that making such political declarations on an Olympic website is in violation of the Olympic Charter, and said an official with the Olympic organizing committee didn’t offer a clear answer on PyeongChang’s next steps.

The English site for PyeongChang 2018 introduces Dokdo and its neighboring Ulleung Island as “Korea’s Easternmost Islands” under its “Republic of Korea Culture” section. The accompanying blurb says, “Dokdo holds a special place in the hearts of Koreans as they hold pride in defending Korea’s easternmost reached territory.”

Jordan Spieth, the world No. 5 in men’s golf, shared his wisdom with Korean junior golfers Thursday.

Spieth, the 2015 Masters and the U.S. Open champion, visited Seoul to attend the opening of the first South Korean store for the U.S. athletics apparels brand Under Armour. The company also launched Spieth’s signature golf shoe: the Spieth One.

During the corporate event, Spieth gave quick swing tips to a select group of junior golfers in attendance. Asked about what goes through his mind in a typical round, the 23-year-old said the key is to temper his expectations.’

“Normally, I focus on how the course is playing and set my expectations for scores,” he said. “I have one or two swing thoughts as my triggers, and I try to work my ball flights off that. I want to be confident but manage my expectations throughout the day, and also try to stay consistent.”