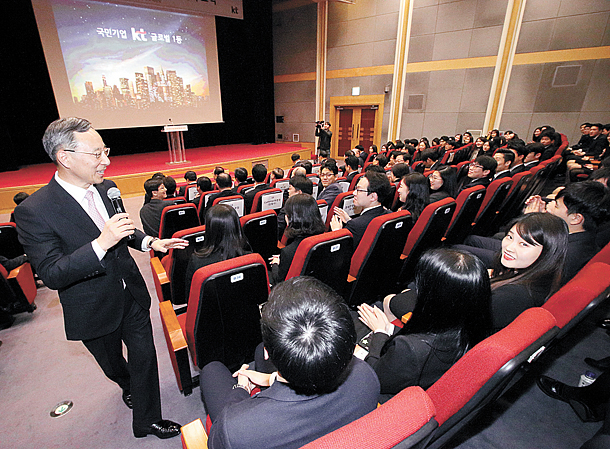 KT Chairman and CEO Hwang Chang-gyu strikes a conversation with the company’s new recruits at KT’s office in Bundang, Gyeonggi, on Friday. [KT]

KT Chairman and CEO Hwang Chang-gyu, who is vying for his second term with the leading telecommunication company, advised new recruits to become employees who push the envelope on any challenges that they face.

“KT has embarked on a new challenge of becoming more than a leading telecommunication service provider in the country and as a No.1 innovative technology company,” Hwang told 312 employees who were attending a new-recruit ceremony at the company’s office in Bundang, Gyeonggi, on Friday. “You, the new employees, will play a significant role in helping KT become a No. 1 innovative technology company by challenging limits, actively communicating and cooperating with each other.”

Hwang, who has served as KT chairman since 2014, earlier this month announced his interest in being reappointed to his current role that ends in March. Currently, the internal CEO recommendation committee at the company is in the process of selecting KT’s next chairman, including looking into the eligibility of Hwang serving another three-year term.

The company’s internal committee, comprising seven outside directors and one internal director, is likely to decide on whether to push forward Hwang as the sole candidate by the end of this month.

While Hwang has succeeded in improving company performance during his term, a possible variable is speculation on Hwang’s involvement in the influence-peddling scandal centered on President Park Geun-hye and her friend, Choi Soon-sil.

In 2015, Hwang led the mobile carrier into the black by recording 1.293 trillion won ($1.1 billion) operating profits, after recording a deficit in 2014. However, during the ongoing investigation by a special team of prosecutors on the Choi scandal, speculation has been looming that KT unfairly granted orders to an advertising company essentially owned by Choi.