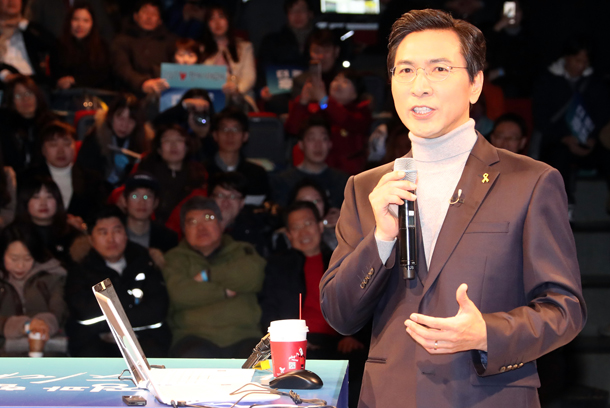 South Chungcheong Governor An Hee-jung announces his bid for president in a theater in Daehangno, Seoul, on Sunday. [YONHAP]

South Chungcheong Governor An Hee-jung, a passionate advocate of late President Roh Moo-hyun, officially declared on Sunday his intention to run for president, becoming the first member of the main opposition Democratic Party to announce his candidacy.

The 51-year-old is the third to make a presidential bid in the past week, after Rep. Sim Sang-jung, chairwoman of the minor liberal Justice Party, made hers last Thursday, followed by Chung Un-chan, who served as prime minister from September 2009 to August 2010 under the conservative Lee Myung-bak administration, later the same day. More contenders are likely to join the race in the coming weeks, as Korea’s next presidential election will be bumped up on the political calendar if the Constitutional Court removes President Park Geun-hye from office.

The court has until June 6 to give a final verdict. If it does approve the impeachment, a presidential election must be held within the following 60 days. If President Park is not removed, she will leave office as originally planned in February 2018.

An, who has been serving as South Chungcheong governor since July 2010, highlighted “diplomatic security” as his national priority if he becomes president, saying the past nine years of President Lee and President Park paved the way for it to “retreat.”

The governor said he would “respect” the Park administration’s decision to deploy the U.S.-led Terminal High Altitude Area Defense (Thaad) system in South Korea. “Overturning the decision to deploy Thaad will cause a serious crisis in the balance of power of Northeast Asia,” he said.

On economics, An said he would keep the country focused on opening borders for global trade and pursue a “revolutionary economic model” as well as a “fair democratic market order.”

Regarding his relationship with Moon Jae-in, former leader of the Democratic Party and another strong presidential contender who has yet to officially announce his bid, An said he had been cautious about getting on the wrong side with him, which local media portrayed as An being vague and inarticulate about his political values. An said it was “too difficult” for him to speak ill of Moon in public because in order to do so, he would have to spend all his energy studying the matter instead of looking into the country’s future.

Now that he has declared his intention to run for president, An said he would take the opportunity to speak candidly about whether or not he agrees with Moon’s policies.

In a Facebook post, Moon wrote Sunday that he “welcomed” An’s bid and looked forward to running against him in a primary election.

In the latest poll of the most-favored presidential hopefuls, conducted by Real Meter of 1,519 Koreans for three days last week, An ranked sixth with an approval rating of 4.0. Moon ranked first with 28.1 percent.