President to sue JoongAng over report on blacklist

President to sue JoongAng over report on blacklist 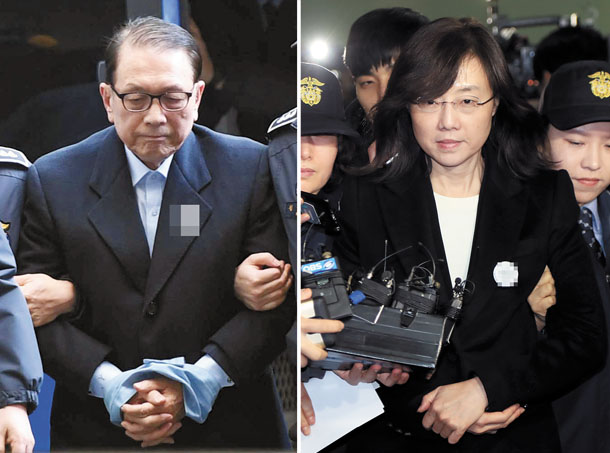 Kim Ki-choon, left, former presidential chief of staff, and Cho Yoon-sun, right, former culture minister, are taken to the independent counsel team on Sunday for further questioning over blacklisting cultural figures who they thought were critical of the government. The two were detained Saturday morning on charges of abuse of power. [YONHAP]

President Park Geun-hye decided to sue the JoongAng Ilbo and its source from the independent counsel team on charges of defamation over a report that she ordered the government to create a blacklist of artists critical of her administration to control public sentiment in the aftermath of the Sewol ferry’s sinking in 2014.

Hwang Seong-wook, a lawyer of Park in her impeachment trial, said Saturday that she never ordered anyone to make the so-called blacklist of artists and cultural figures.

In his text message to reporters, Hwang also said Park decided to file criminal and civil suits against journalists and other members of the JoongAng Ilbo for defaming her with its report.

The president is also suing a member of the independent counsel who was quoted in the report as a source.

“Those who frequently make false reports under the shadow of anonymity must stop manipulating the press,” Hwang said. “We also urge the press to report only confirmed, objective facts.”

On the front page of Saturday’s edition, the JoongAng Ilbo, an affiliate of the Korea JoongAng Daily, published an exclusive report saying that Park was behind the blacklist scandal.

The report said independent counsel Park Young-soo and his team have so far concluded that the creation of the list started about one month after the tragic ferry accident, which led to the death of 306 people due to the delayed government rescue efforts.

The independent investigation, launched in December, is looking into a series of allegations involving Park and her associates as well as conglomerates. In addition to bribery accusations, the team investigated the allegation that the administration created and managed a list of artists deemed critical to the government to deprive them of funds and opportunities.

Quoting a source from the team, who asked for anonymity, the JoongAng Ilbo reported that the independent counsel’s warrant requests to the Seoul Central District Court to detain Kim Ki-choon, former presidential chief of staff, and Cho Yoon-sun, culture minister, stated that Park ordered the list to be created in May 2014.

The source said Kim passed down Park’s order to senior secretarial offices in the Blue House and Cho, then political senior secretary, led the initiative after she took the post in June 2014.

The Seoul Central District Court issued warrants to the counsel to detain Kim and Cho on Saturday. After becoming the first incumbent minister to be detained for an investigation, Cho immediately submitted her resignation and Prime Minister Hwang Kyo-ahn, acting president, accepted it.

The Ministry of Culture, Sports and Tourism will temporarily be headed by its vice minister.

The independent counsel questioned Cho for about three hours after she was taken into custody. Cho and Kim were summoned again for questioning Sunday afternoon.

The independent counsel also said it will soon seek a warrant to take custody of Choi Soon-sil, Park’s controversial friend, for questioning. Choi was indicted in November on charges of coercing conglomerates in collusion with the president to make massive donations to nonprofit foundations she controlled. She is currently going through her criminal trial under detention.

According to assistant independent counsel Lee Kyu-chul, the team summoned her seven times so far, but she only showed up once. As her latest excuse was a groundless claim of forcible interrogation, the team concluded that she has no intention to cooperate and will seek a warrant to arrest her, Lee said.