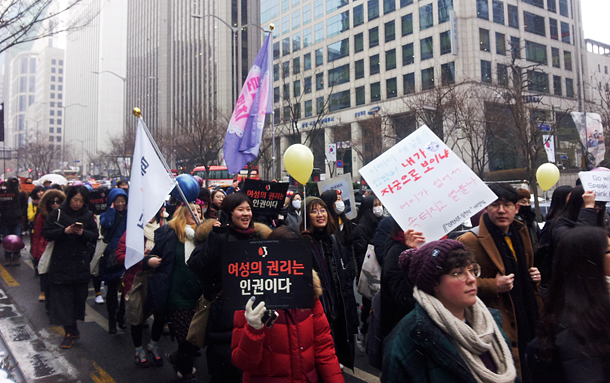 More than 2,000 march in the Women’s March on Seoul near Gangnam Station, southern Seoul, on Saturday. Protesters hold signs that read “Women’s rights are human rights” and chant this phrase along with “My body, my choice.” [MONICA WILLIAMS]

Hundreds of thousands of women crowded the Mall in Washington, D.C., one day after Donald Trump was sworn in as U.S. president to protest his platform and show support for women’s rights.

Almost 7,000 miles away in Seoul on Saturday, men and women marched on snow-covered sidewalks in solidarity. They marched in Incheon, too.

They totaled an estimated 2 million with almost 700 sister marches from New York to Nairobi, London to Los Angeles and Geneva to Gangnam, southern Seoul. With three weeks to prepare, organizers in Seoul expected only 450 marchers but 2,000 showed up.

The crowd at Gangnam Station was buoyant, even ebullient. Many held up signs - “Make Abortion Legal!” and “Revolutionize Love” - while others chanted “Women’s rights are human rights” and “My body, my choice” in English and Korean.

What began as a Facebook invitation the day after the Nov. 8 elections in the United States quickly grew to Saturday’s global masses, which had a platform that supported the rights of workers, immigrants, disabled people and environmental justice. Protesters in Seoul said they were not marching against Trump but in favor of everything that he seems to be against. As the crowd included both Koreans and expatriates, many of the women did not vote for Trump but his win, no doubt, brought them together.

As they did in May, protesters left Post-It notes on the gate at Exit 10, which became a central mourning site in May after a woman was stabbed to death by a stranger in a bathroom near the station.

“The reason we are hosting this march is because we object to misogyny and oppression against minorities,” said Park Soo-youen, one of the organizers. “We also believe our voices will echo louder and further when women all around the world stand together.”

Hannah Cone, an American expat from New Mexico, held a large placard with an image of the late actress Carrie Fisher that read, “A woman’s place is in the resistance.” Cone, who was joined by several of her colleagues at Korea International School in Bundang, Seongnam, made extras and offered them to women on the sidewalk who stopped to observe. “I’m a feminist and have lately been a couch activist. It’s time to take a stronger stand and let our voices be heard. There are women out here for climate change, reproductive rights, education. A lot of those causes can go together.”

Nuri Park from Seoul, who works in a Seoul government office, was with her boyfriend, Jae Eun-eon. “I stand for women’s rights as safety in dating is a problem in Korea,” she said, echoing the sentiments of many Korean female protesters. “I want to demonstrate that there’s a problem with sexism and violence against women and improve on that.” Her boyfriend advocated for LGBT rights.

“We look to America,” said Chantal Terblanche from Pretoria, South Africa, who marched in a cape and held up a “Feminist AF” sign. “If we let Trump get away with these kinds of things, who’s to say the next guy isn’t going to try to get away with it?”