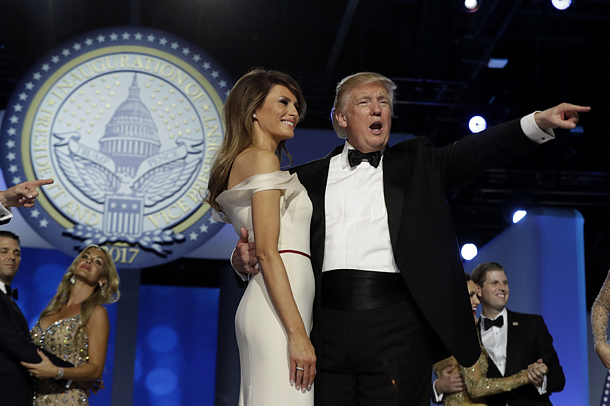 The inaugural address of the new U.S. President Donald Trump and the first policy goals presented by the White House signaled a rocky road ahead for Korea, particularly in its free-trade arrangement and military alliance with the superpower.

“From this moment on, it’s going to be America First,” Trump declared in his inaugural speech, stressing that his government’s every decision, including those on trade, immigration and foreign affairs, will be made “to benefit American workers and American families.”

He added, “We must protect our borders from the ravages of other countries making our products, stealing our companies, and destroying our jobs. Protection will lead to great prosperity and strength.”

“For many decades, we’ve enriched foreign industry at the expense of American industry; Subsidized the armies of other countries while allowing for the very sad depletion of our military,” he said. “We’ve defended other nation’s borders while refusing to defend our own; And spent trillions of dollars overseas while America’s infrastructure has fallen into disrepair and decay.”

He also made it clear that his vision will influence Washington’s foreign policy.

“We will seek friendship and goodwill with the nations of the world - but we do so with the understanding that it is the right of all nations to put their own interests first,” he said, although he added that he will reinforce old alliances and form new ones.

In his inaugural speech, he mentioned alliances only once.

Following the inauguration, the White House made public the six key policy directions of the Trump administration. They cover Trump’s energy, foreign, military and trade policies as well as employment and law enforcement visions.

In a key announcement made as a part of the “Trade deals working for all Americans” chapter, the Trump administration said the United States will withdraw from the Trans-Pacific Partnership and make certain that any trade deals are in the interests of American workers.

He also vowed to renegotiate the North American Free Trade Agreement (Nafta). “If our partners refuse a renegotiation that gives American workers a fair deal, then the President will give notice of the United States’ intent to withdraw from Nafta,” the White House said.

Although the Korea-U.S. free trade agreement was not mentioned this time, concerns are high in Seoul that Trump may touch the issue anytime. “Until now, we have expanded our economic territory by signing FTAs,” said a Korean government official. “Whether it is a bilateral agreement or a multilateral agreement, we may sustain a blow.”

In his military policy plan, Trump vowed to end the defense sequester and submit a new budget to Congress to strengthen the U.S. military. As his negotiation with Congress to increase the defense budget will likely face obstacles, speculation is high that Washington will put strong pressure on its allies to shoulder more of the burden in the defense cost sharing programs.

“Members of NATO [North Atlantic Treaty Organization], which largely cut defense burdens after the end of the Cold War, will likely be the first targets, but we must also be prepared,” said Professor Kim Hyun-wook of the Korea National Diplomatic Academy.

“We will persuade the United States by stressing that our defense cost sharing rate is higher than those of Japan and Germany,” a South Korean official said. “We will also stress that we have imported 35 trillion won [$29.8 billion] worth of U.S-build weapons over the past decade.”

Trump also mentioned North Korea in his military policy roadmap. “We will also develop a state-of-the-art missile defense system to protect against missile-based attacks from states like Iran and North Korea,” it said.

Seoul officials pay special attention to the fact that the Trump administration dealt with the North Korea issue in the defense policy chapter, not the foreign policy roadmap. “It is a clear indication that the United States will bolster its military readiness against the North’s threats in addition to sanctions and pressures,” said a South Korean foreign ministry official. “This will be a significant warning to the North.”

Seoul said it will use all possible diplomatic power to accelerate high-level talks with Washington. The Blue House said Sunday that Kim Kwan-jin, head of the National Security Office, had a telephone conversation in the morning with U.S. National Security Advisor Mike Flynn and agreed to continue close cooperation in key security issues, including the North Korean nuclear threats.

It was the first senior-level dialogue between the two countries after the Trump inauguration, and the Blue House said the phone conversation was arranged at U.S. request. Kim and Flynn had a meeting in Washington earlier this month and agreed to keep Seoul and Washington’s agreement to deploy the Terminal High Altitude Area Defense (Thaad) system in Korea.