Father of Korean publishing left a lasting impact : Park Maeng-ho, founder of influential imprint and advocate for unique voices, passed away at 84

Father of Korean publishing left a lasting impact : Park Maeng-ho, founder of influential imprint and advocate for unique voices, passed away at 84 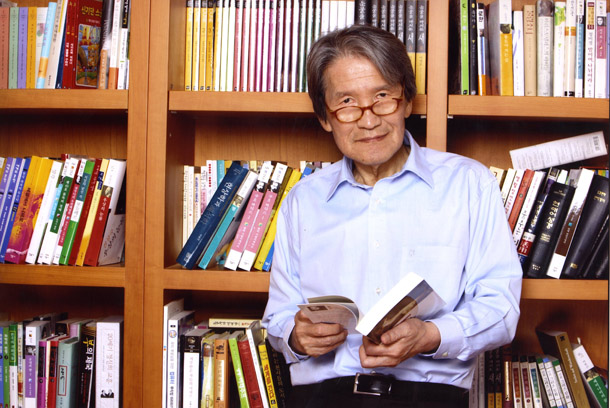 Park Maeng-ho, the late president of the Minumsa Publishing Company, passed away on Sunday. [JOONGANG ILBO]

“I am made by books, and books became my reason for being.”

This is how Park Maeng-ho, the late president of the Minumsa Publishing Company, looked back on his life in his 2012 autobiography titled “Book.”

It’s perhaps safe to say that there is no better word than “book” to describe who he was and what his life was all about.

Park, one of the biggest names in Korea’s publishing industry, passed away on Sunday.

Renowned figures in Korea’s literary and cultural circuits paid their respects at the funeral home set up at the Seoul National University Hospital, calling him “a pioneer,” “the father of Korean books” and even a “Santa Claus of literature.”

The 84-year-old is survived by his wife and the three children who are leading Minumsa and its affiliates.

Park, who was born in Boeun, North Chungcheong in 1933, initially wanted to be a writer himself. After enrolling in Seoul National University as a French literature major in 1952, he wrote a short story and won a literary prize.

But in 1966, he opened Minumsa in a tiny office, and began to discover new talent instead. He has made poets and writers like Ko Un, Kim Su-young and Yi Mun-yol who they are today. The word “minum” means “carrying the honest voice of the people,” highlighting his determination to help such voices be heard in the dark days under the military government.

“The literary market in postwar Korea was quite a mess,” he told Korea JoongAng Daily in an interview in 2013. “You weren’t sure if you could trust all of what was written or if the translation was accurate.” Park wanted to changed that.

Minumsa’s moves were often a step ahead of the industry. That’s why one can say Park’s career or Minumsa’s achievements pretty much wraps up the history of Korea’s publishing industry.

The group’s first book, which was on yoga and released in 1967, sold 15,000 copies and became a best seller. “Today’s Poets” and “Today’s Novelists” came out in the 1970s, when poems and novels were underappreciated. “Today’s Poets” was also the first book to adopt horizontal text. “Complete Works of World Literature” hit shelves in 1998, also a first in Korea.

Back then, young novelists had no way of publishing a book, but the awards’ deal was that if they won, the group will design and publish their novel, promote it and pay them the royalties.

“Discovering a new talent is discovering a new voice, new emotions and new values and allowing them to be heard. It is a good thing to do, and the most virtuous thing,” Park told during the interview.

Yi Mun-yol, known for “The Romance of the Three Kingdoms,” told a Korean newspaper that “the publishing industry will have to wait a long time for someone like Park to arrive.” Ko Un, often cited as the Korean front-runner for the Nobel Prize in Literature, also said Park ushered in Korea’s literature renaissance. Lee O-young, a literary critic and Korea’s first culture ministry, said Park is a “Santa Claus in literature.” “He wanted to be a writer himself but he couldn’t fulfill his dreams. Through publishing he gave [that chance] to others.”

On the future of Korean publishing industry as people read fewer books, Park was sure that people won’t stop reading. “It’s just in human’s DNA - reading books is what we do,” Park said in a recent interview with the Korea JoongAng Daily. “Civilizations have read for thousands of years. Humans won’t just abandon that overnight.”