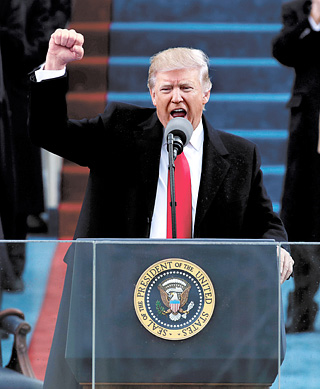 President Donald Trump pumps his fist during his inaugural address in Washington on Friday. [AP/YONHAP]

The era of Trump, where the only predictable thing is his unpredictability, has begun. His inaugural speech lasted just 16 minutes, but it was filled with remarks that portend bloody battles to come.

“The time for empty talk is over,” he said. “Now arrives the hour of action. ... No challenge can match the heart and fight and spirit of America.”

“We will follow two simple rules,” he continued. “Buy American and hire American. We will seek friendship and goodwill with the nations of the world, but we do so with the understanding that it is the right of all nations to put their own interests first.” There has never been an American president before Trump who so bluntly and harshly pushed forward the pre-eminence of power and the principle of force over dialogue.

“For many decades, we’ve enriched foreign industry at the expense of American industry, subsidized the armies of other countries while allowing for the very sad depletion of our military,” he said. “We’ve defended other nations’ borders while refusing to defend our own and spent trillions of dollars overseas while America’s infrastructure has fallen into disrepair and decay.” This simple and clear victim mentality is ruling him.

His predecessor, Barack Obama, knew very well about the fall of the United States. He, however, did not blame other countries for it. Obama wanted America to get back up again. His speech, which expressed his desire that small countries from around the world would have hope seeing America rebuild, has become a past chapter in history.

Korea needs to make a new deal with the new president of the United States. But Trump does not recognize the current Korean administration as a partner because of its uncertainty. Last week, Korea’s finance minister visited the United States but failed to meet with officials in the incoming administration. Although Trump picked new ambassadors to China and Japan, he did not nominate one for Korea.

The current ambassador, Mark Lippert, returned to the United States and handed over his job to a deputy. Some dialogue has only been maintained on urgent security issues, and it is questionable if close diplomatic and economic cooperation is on its way between Seoul and Washington.
While the world is trying to find a way to deal with the new U.S. president, Korea is doing nothing but paying attention to its next presidential election, of which the date has not even been set. The Korean political calendar must progress faster. If President Park Geun-hye has any patriotism, she must do her best to conclude the impeachment process as quickly as possible. If she wastes any more time with excuses and stalling, and then Korea fails to find the timing to get used to the new world order created by Trump, she will face an additional sin.

Korea’s presidential candidates are also doing nothing but working within the framework of the anti-Park protests. The people judged a foolish president who handed over power to an individual with no qualifications. The people punished her for incompetence and corruption. This is not something to be exaggerated, but one candidate has already vowed to start a war of history and ideology against descendants of pro-Japanese collaborators and dictatorship.

It is time to pay attention to the reality that has been completely changed by the appearance of Trump. All the candidates must present meticulous plans and countermeasures for Korea to survive in the jungle of Trump, Xi Jinping, Vladimir Putin and Shinzo Abe.

According to sources who contacted the Trump camp, the president met with former U.S. State Secretary Henry Kissinger before having a phone conversation with Taiwanese President Tsai Ing-wen in December. Kissinger was the one who made an agreement with Mao Zedong and Zhou Enlai on the One-China policy in 1972. When Trump asked Kissinger if he had to respect the policy, Kissinger reportedly told him there can be “two Chinas” and “three Chinas” if it serves America’s interest. The only thing that needed to change this 94-year-old veteran strategist’s pro-China stance to anti-China after 40 years was national interest.

Kissinger probably thought the United States had much to gain from the One-China policy, but the time has come to contain China, which has grown to threaten the United States. The strategic phone call decision by Trump and Kissinger that surprised China was created based on realpolitik solely focused on national interest. It should be an inspiration and challenge for the Korean presidential contenders’ conceptual approaches based on the ideology that “once a pro-North is forever pro-North, and once an anti-North is forever anti-North.”