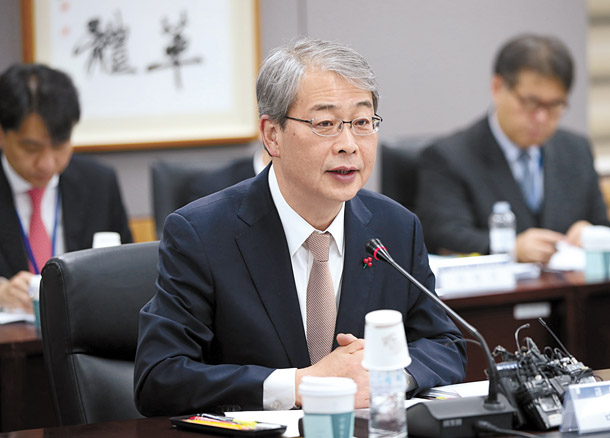 State-run financial agencies will increase their recruiting this year as Yim Jong-yong, chairman of the Financial Services Commission, urged their leaders to hire more young graduates.

Yim said Monday that the institutions will hire about 1,000 new employees this year, 35 percent more than they did in the previous year.

“The government will focus on policies that aim to boost the job market this year as well,” said Yim at a meeting with heads of public financial institutions at the Central Government Complex in central Seoul on Monday. “I was notified that they will hire about 1,000 new employees this year and I hope they proceed with their plans as early as possible.

“I will also do my best to create more high quality jobs in private financial sectors through vitalizing internet-only banks and the fintech industry.”

The institutions include the Industrial Bank of Korea, Korea Development Bank and Export-Import Bank of Korea.

The chairman has chosen a stable financial market, stability in the lives of people and revitalizing the economy as the top three goals for this year.

Yim has asked the financial institutions to be prepared for the possible changes in the financial market, while allowing low-income households and small and midsize firms to borrow from the state-run banks, if possible.

Yim requested that the financial institutions execute a budget for government-run projects as early as possible so that funds are available to those who need them.

“Execute the 58 percent of the budget planned for this year in the first half of this year,” Yim told the heads of the institutions.

Meanwhile, Yim said he will push to reform the financial sector, which include various measures such as adopting a merit-based wage system.

“One of the key agendas for the financial market reform is to spread the working environment where people are paid based on their performances,” said Yim.

“I urge heads of public financial institutions to talk with labor union members to expand the merit based wage system in the country.”