After price hike to stamp out smoking, tobacco sales rise

After price hike to stamp out smoking, tobacco sales rise 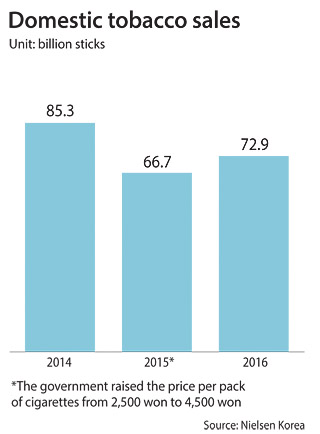 Although the government raised cigarette prices in January 2015 to reduce the number of smokers in the country, a recent study showed that tobacco sales increased.

Purchases rose 9.3 percent year on year to about 72.9 billion sticks last year, or nearly 3.64 billion packs of 20 cigarettes, according to data from Nielsen Korea on Sunday.

However, they rose again last year, which might suggest that consumers bought lots of cigarettes before the price increase and that more of them are getting used to the new prices.

“It appears that there were more people in the end of 2014 who purchased cigarettes in advance as they were aware of the price hike to be implemented in January 2015,” said an analyst. In fact, sales in December 2014, a month before the new prices took effect, jumped 25 percent year on year.

An analyst said stress, due to rising consumer prices and the ongoing political scandal, might be leading people to smoke more.

“Consumer price hikes in the country along with various uncertainties such as the ongoing political scandal appear to have more people to be stressed out, which led to them to buy more cigarettes last year,” the analyst said.

“It appears that the government’s goal of lowering the smoking rate by raising the tax seems unclear or ineffective as they planned now as the sales rose nearly by the double digits.”

A smoking activist who opposes the government’s policy to raise tobacco taxes said the government has failed to see the outcome that it has sought and instead have added a financial burden for low-income households.

“The government said the price hike will reduce the smoking rate about 3 to 5 percent but it appears that there hasn’t been much change to the rate,” said Lee Yeon-ik, head of I Love Smoking, a nonprofit that works for smokers’ rights. “If they really wanted to drop the smoking rate then they could have raised the price way higher as many researchers suggested.”

The government also decided to add warning labels on cigarette packs starting Dec. 23, which it believes it will help lower the smoking rate.

The government says that the labels will lower the smoking rate significantly, citing data showing that consumption in 10 countries that have added graphics to cigarette packs, including Canada, Australia and the United Kingdom, saw consumption fall 8.4 percent on average the year after the new laws went into effect.