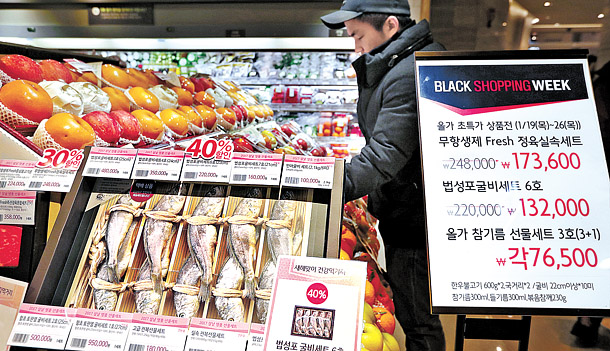 The weekend before Lunar New Year is usually one of the busiest shopping periods of the year as Koreans prepare for family gatherings and ancestral rites.

But on Sunday, the scene at the grocery section of Lotte Department Store’s main branch in Sogong-dong, central Seoul, was noticeably mellow. There were fewer crowds shopping for the store’s high-priced gift sets commonly traded between friends, family and acquaintances over the holiday. A slow economy and an antigraft law implemented in November have dealt a double whammy to sales of these traditional luxury gifts.

The keyword this year has been cheap. Shoppers have shown a bigger preference for lower-priced gifts, and with just a few days left until Lunar New Year, high-end department stores are pulling all the stops to try and draw customers - including discounting their fancy gift sets. A Chilean wine set at Lotte Department Store worth 170,000 won ($145) is being sold at 74 percent off and a 210,000-won Korean beef set is going for 54 percent off. 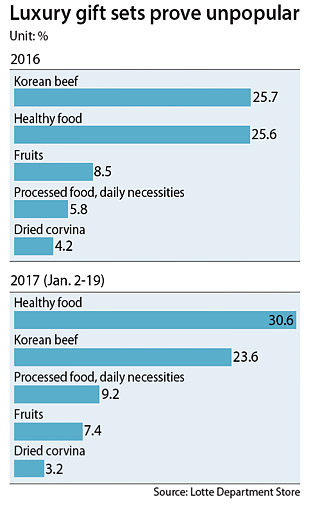 Other department stores including Shinsegae, AK Plaza and Galleria are hesitating to discount their gift sets. “The decision is not an easy one if we think of customers who already purchased gift sets,” said a source at one of the department stores. “They might file complaints.”

In general, gift sets released this year have been lighter than in previous years, a reflection of the slow economy and the recently implemented antigraft law known as the Kim Young-ran Law, which limits the price of gifts to public officials, journalists and teachers to no more than 50,000 won. Lotte Department Store has a stall with gift sets specifically marked as under 50,000 won.

The law’s effect has been particularly big on Korean beef, fruits and dried corvina - known as the “big three” in Lunar New Year gift sets. Last year, Korean beef accounted for 25.7 percent of all gift sets sold at Lotte Department Store, taking first place as usual. This year, the share shrank to 23.6 percent and was overtaken by health food. Fruits went down from 8.5 percent last year to 7.4 percent, and dried corvina went from 4.2 percent to 3.2 percent.

Things are expectedly better at discount chains, where gift sets are cheaper than at department stores. Their sales have slightly increased: between Dec. 5 and Jan. 18, sales at Lotte Mart rose 5.1 percent from last year, and E-Mart released 40 kinds of dishes used for ancestral rites, such as beef gravy and Korean pancakes, through its private brands Peacock and No Brand. It also discounted Korean and American beef 20 to 30 percent.

Gift sets with multiple products in one box, like wine and Korean beef together, have also been popular. Last Sunday, E-Mart released 50 gift sets with a mix of items including wine, Korean beef, seafood, fruits and processed goods. Most were sold out. “Single-person households prefer many kinds of items in one set, and manufacturers want to lower prices by mixing products together,” an E-Mart spokesman said.

Consumer preference for low-cost gift sets has shown most clearly in online shopping sites, where competition for lower prices is fiercer. About 90 percent of all gift set sales between Dec. 26 and Jan. 16 on WeMakePrice were below 20,000 won. Most sales were between 10,000 and 20,000 won (accounting for 42 percent) and below 10,000 won (39 percent).

As a result, delivery companies have also benefited. “The amount of parcels rose 15 percent compared to last year’s Lunar New Year season,” said Cho Jeong-hoon, a public relations manager at CJ Korea Express. “Our analysis is that consumers are sending smaller gifts to more people in the aftermath of the antigraft law.”