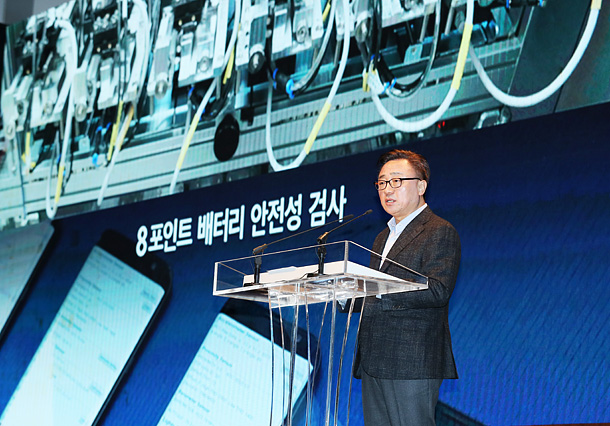 Koh Dong-jin, head of Samsung Electronics’ smartphone business division, holds a news conference at Samsung’s office in southern Seoul to announce faulty batteries were the main cause of the Note7 overheating and exploding. [YONHAP]

After a monthslong investigation, Samsung Electronics said Monday that the Galaxy Note7’s battery was the main cause of the device overheating and exploding, the same conclusion it had drawn earlier in September, when reports of the exploding phones first surfaced.

“We examined every aspect of the Galaxy Note7 and confirmed hardware, software and all related logistics processes of the product had nothing to do with the burning of the phablet,” said Koh Dong-jin, head of Samsung’s smartphone business division, during a press conference at the company’s office in southern Seoul. “It was the battery after all.”

The fiasco last year led Samsung to recall all Galaxy Note7s and discontinue production in October, resulting in an estimated loss of $6 billion. As part of its investigation, the company said it replicated incidents by testing more than 200,000 phones and 30,000 batteries. It found the phones and batteries burnt up in similar rates.

In September, when Samsung first decided on a global recall following reports of the Note7 catching fire, the company blamed its battery-supplying affiliate Samsung SDI. 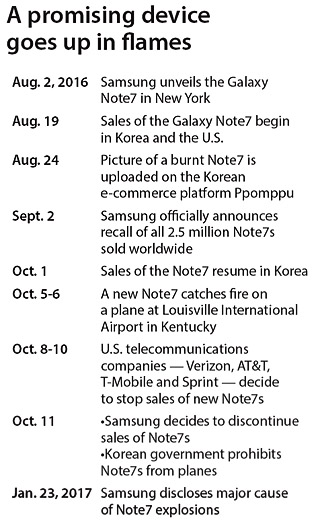 But when explosion reports continued even after Samsung switched to a Chinese battery supplier ATL, speculation arose that the root of the problem was in the phone’s software or other features like its iris-scanning function or waterproofness.

Rebutting such concerns, Koh said, “We have received various suggestions from the media and even senior workers who retired from our company, but after a series of testing, we have reached a conclusion that there were separate design errors in batteries supplied by both companies and our findings are consistent with test results of three independent companies that participated in the investigation.”

UL said a design flaw in the upper corner of Samsung SDI’s batteries and thin separators between the positive and negative electrodes were major factors that contributed to the overheating problem. For ATL’s batteries, it cited “a combination of missing insulation tape, sharp-edged protrusions on the battery’s tab and thin separators” as causes.

Exponent pointed to similar factors as major causes and confirmed there was no fault in the Note7’s battery system itself.

TUV Rheinland, which investigated other related processes such as product assembly, quality assurance testing and logistics, confirmed there were no factors found in the process that could lead to overheating.

Even with the new findings, Koh said Samsung has no intention of taking legal action against suppliers including Samsung SDI and ATL.

“For our flagship models like the Note7, about 450 companies supply parts, and we have been cooperating with them on multiple models of Samsung,” Koh said. “We as the final maker of the phone also have responsibility to verify the safety of each part and do not think we should charge suppliers solely liable for the incident.”

To prevent any safety issues from arising in the future, the company said it implemented stricter guidelines on eight battery tests, including a total volatile organic compound test, which checks for any leakage of fire-prone organic compounds.

Samsung has also set up a Battery Advisory Group comprising four outside experts, including Clare Grey, professor of chemistry at the University of Cambridge, and Gerbrand Ceder, professor of materials science and engineering at UC Berkley.

“We must recognize that these batteries have inherent risks,” Grey said, which inevitably grow “as we push for increasingly higher energy density batteries,” adding that she hoped the board would “help improve the safety of battery technology for Samsung and the entire battery industry.”

Whether the announcement and safety measures will restore trust from Samsung consumers will likely be shown through the upcoming release of the Galaxy S8. The phone will not be showcased at the Mobile World Congress in Barcelona, Spain, next month, Koh said. Industry sources project the likely release date to be between the end of March and mid-April.