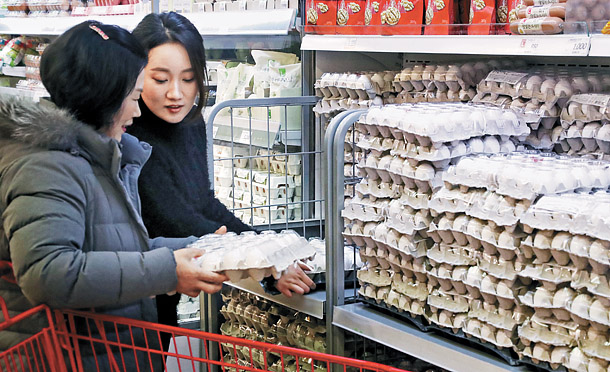 About 1.5 million eggs imported from the United States for the first time went on sale at discount chain Lotte Mart on Monday, and customer reviews have so far been mixed - starting with the color.

“I just don’t feel comfortable buying white eggs,” said one shopper surnamed Oh at the Seoul Station branch of Lotte Mart as she placed a carton of 10 brown Korean eggs in her cart. “I’ve never tried the white ones before.”

The government began importing fresh eggs from the United States earlier this month, a rare move meant to ease an egg shortage in Korea caused by the worst bird flu outbreak in years. More than 30 million chickens have been slaughtered, nearly a third of which were egg-laying hens.

This sent egg prices soaring more than 70 percent, from an average price of 5,600 won ($4.80) for a 30-egg tray in November to as high as 10,000 won this month. The rise in egg prices is especially ill-timed because ancestral rites for Lunar New Year, which starts this week, require a lot of eggs.

White eggs from the United States officially kicked off sales in Korea on Saturday, first appearing at a small supermarket in Guro District, southwestern Seoul. The large discount chain Lotte Mart began selling them on Monday for 8,490 won per 30-egg tray, 500 won less than what was initially announced. Lotte Mart said it reduced the price because the government increased its subsidy for shipping costs from 1 million to 1.5 million won.

As a result, the imported American eggs were popular at Lotte Mart branches where trays of 30 Korean eggs had sold out. “It is not that cheap, but buying three 10-egg trays [which cost 3,680 won each] would be much more expensive,” said Yang Se-myung, a customer at the Lotte Mart in Seoul Station, “so I decided to buy the imported product.”

Some customers held back on buying the U.S. eggs, saying they were dubious of their freshness and taste.

“I bought Korean eggs because they’re stated as made without antibiotics,” said a 57-year-old homemaker from Jongno District, central Seoul, who picked up a tray of 10 Korean eggs. “I don’t need eggs in bulk, so there is no reason for me to buy imported eggs.”

A Lotte Mart spokesperson said 30-egg trays of the American imports have been selling at the same rate as Korean egg trays before the bird flu outbreak. The exact sales figures, though, have not yet been compiled.

“We are not considering bringing in more imported eggs at the moment,” the spokesman said. “We will have to see how customers respond to it.”

Rival discount chains E-Mart and Homeplus said they are not considering selling imported eggs at the moment. “We are managing egg demand from domestic suppliers as of now,” an E-Mart spokesman said.

The government plans to import 300 more tons of eggs from the United States through the state-run Korea Agro-Fisheries & Food Trade Corporation, 50 tons of which will enter the market before the Lunar New Year starts on Saturday.