‘Split’ surprises and scares its way to the top spot

‘Split’ surprises and scares its way to the top spot 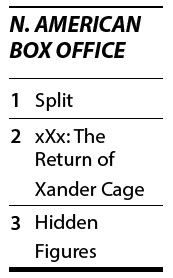 Though many were focused on Friday’s presidential inauguration and Saturday’s nationwide women’s marches, “Split” doubled forecasts to easily lead all films. The Universal Pictures release again brings together Shyamalan, director of “The Sixth Sense,” with the low-budget horror experts of Blumhouse Productions.

The PG-13-rated “Split,” starring James McAvoy as a man with split personalities, cost less than $10 million to make.

Despite the weekend’s political events, the North American box office was up 29.2 percent from the same weekend last year, according to comScore.

“You would think that those events would suck the air out of the room, but that didn’t happen,” said Paul Dergarabedian, senior media analyst for comScore. “The movie theater experience with the right content is irresistible no matter what is going on in the outside world, and in fact may even benefit from so much going on in the outside world. To have your wits scared out you is one of the greatest escapes.”

A pair of other new releases had more difficulty rounding up audiences. The Weinstein Co.’s “The Founder,” a biopic about Ray Kroc of McDonald’s starring Michael Keaton, launched in 1,100 theaters but gathered only $3.8 million. It will be hoping for an Oscar nomination on Tuesday to help it stand out of the adult-skewing releases.

Bombing altogether was the Christian drama “The Resurrection of Gavin Stone,” which took in $1.4 million from 1,000 theaters. AP