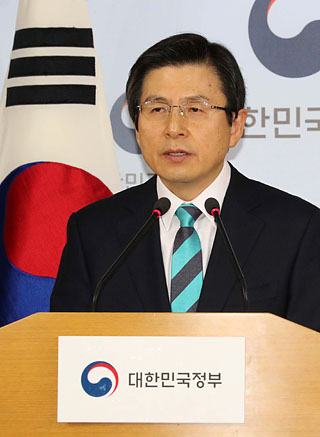 Prime Minister Hwang Kyo-ahn, who is also acting president, mounted a strong defense of the plan to deploy a U.S. missile defense system to the Korean Peninsula, saying Monday it is a “necessary self-defense measure incomparable to any other.”

His remarks came amid mounting concerns over a series of recent steps China has taken against Korean businesses, entertainers and other sectors in apparent retaliation for the planned installment of a Terminal High-Altitude Area Defense (Thaad) system in South Korea.

“I would like to say again that the deployment plan is a definitely necessary self-defense measure that is a step incomparable to any other values,” Hwang said during the New Year’s meeting with local reporters.

As for the rationale for the early deployment, Hwang stressed Pyongyang’s evolving nuclear and missile threats as being “obvious and real.”

Hwang has been serving as the acting president since Dec. 9 after President Park Geun-hye was impeached by the legislature over a corruption scandal.

Asked if Hwang plans to run in the country’s presidential election later this year, he remained noncommittal - a subtle shift from his earlier stance that he would not throw his hat into the ring. “For now, I am not in a situation to think about various other matters,” he said. “It is my duty to focus wholly on normalizing difficult state affairs quickly and preparing the nation for the future.”

Regarding the diplomatic tension between Seoul and Tokyo over the recently erected statue symbolizing Korean victims of Japan’s wartime sexual slavery, Hwang vowed to strive hard to “overcome” the issue.

“Given that it is basically an issue involving civilians, it is not something the government can meddle in,” he said. “But we (with Tokyo) are in consultations through various channels as there is the need to gather our wisdom at the state level over how to deal with it for the future of our bilateral relationship.”

In his opening remarks, Hwang reiterated his vow to push for seamless policy coordination with the U.S. administration on a set of key issues.