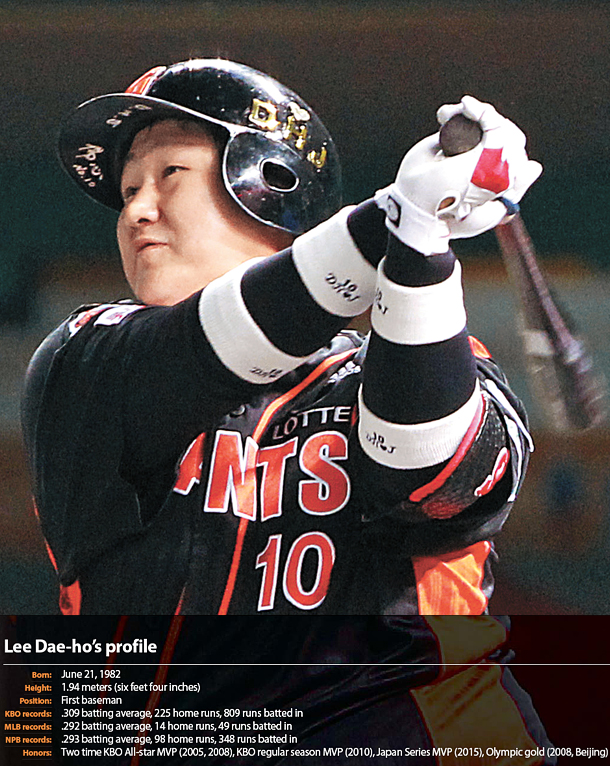 “Big Boy” Lee Dae-ho finally returns to his old stomping ground, Sajik Stadium in Busan, after a six-year stint overseas as he recently signed with the Lotte Giants for four years on a contract worth 15 billion won ($12.8 million). Now that Lee has returned to Korea as the most expensive free agent in the history of the Korea Baseball Organization, the Giants, who have been stuck at the bottom of the league for the past several seasons, are hopeful about the coming season.

After a year playing for the Seattle Mariners in the Major League Baseball, where he batted .253 while tallying 14 home runs with 49 runs batted in (RBI) in 104 games, Lee’s whereabouts during the next season became one of the hottest topics of discussion for the domestic baseball fans and experts. And teams in and outside of Korea shared similar sentiments and had their eyes on Lee’s next destination.

Many teams in the United States and Japan reportedly showed interest in Lee, but no teams have actively negotiated with him. As the time went by, Lee’s possibility of returning to the KBO became more likely, and Lee’s old home team, the Giants, were more hopeful than anyone else, staying in touch with their former slugger all this time.

Despite their apparent interest, the Giants were careful with their words, only saying, “We’re keeping an eye on him.”

But once Hwang Jae-gyun, a third baseman, decided to join the MLB, recruiting Lee became vital for the team that had finished near the bottom of the league for the past three seasons.

Lee Yoon-won, the general manager of the Giants, left for Saipan on Jan. 18 to convince Lee, knowing that if he failed, his team would have any shot at climbing up the league standings next year, not to mention the wave of criticism the club will have to face from the fans.

Since 2013, the Giants have failed to make it into the postseason. The team has undergone managerial changes three times during the past four years, but it wasn’t nearly sufficient enough to bring the team out of the pit.

Although the Giants brought onboard Cho Won-woo as the new skipper last year, the team seemed to have a slew of problems, both offensively and defensively.

Their pitchers were less than solid on the mound and their batters couldn’t make contact with their bats. The team finished eighth in the league in team batting average with .288.

Since Lee departed the Giants after the season in 2011, the club could not find a talent to replace him on first base and on the plate. Many players such as Park Jong-yoon, Kim Dae-woo and Kim Sang-ho had their chances to take a crack at the challenge, but came up short. However, now with Lee back on their roster, the Giants have a batter and infielder they can count on.

“I’ve worked hard and achieved my goal of playing in the major league,” Lee said. “Now, I want to return to the Giants and help my team to win the KBO championship.”

During his 11-year career with the Giants until 2011, Lee batted an impressive .309 with 225 home runs with 809 RBIs, leading the team to the playoffs for four years from 2008 to 2011. While with the Giants, he became the first player in the KBO to claim seven different titles in hitting. He also smacked homers in nine consecutive games to make himself a name as a slugger that represents Korea.

Another positive aspect about his return is the fans, many of whom find their way to the stadium just to watch their old hero play.

“We need Lee on this team,” said the general manager. “He also wanted to return and help the Giants win the championship.”

“He will help us come together as a team,” he added.