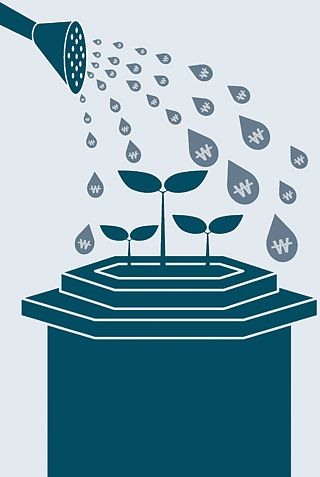 The expedition by 15th century explorer Christopher Columbus made Spain a global power upon the discovery of America and expanded the frontiers of Europeans. The discovery of the New World owed much to Columbus’ persistence and boldness, but could not have taken place without the funding and moral support of the Spanish royalty. If not for the crown’s bold financing of Columbus’ expedition, which was shunned by other monarchs, the American continent would have been discovered much later.

Starting a company is as adventurous and risky as carving out a new sea route and discovering a new land of opportunity. Numerous dangers lie ahead and success cannot be ensured. Venture capital can act like Spanish Queen Isabella I when a financier shares the vision of an entrepreneur. Blockbuster startups were made possible because of angel funds that put their faith in bold and sometimes even bizarre business ideas.

Venture capital companies remain on the rise. Portal giant Naver pledged a 700 billion won fund for startup investments this year and Mirae Asset financial group also vowed to create a 1 trillion won fund with other enterprises to invest in startups annually. Reinvestment in startups is expected to pick up and help foster healthy growth in the startup sector.

Together with the quantitative increase, the fact that half of the investment went to fledgling enterprises less than three years old is a promising sign. Investment in startups still remains short, but bolder investment in untested companies suggests improvement in startup investment.

Some worry venture capital funds are expanding faster than the number of startups and their capabilities. But startup investment across the globe is rapidly increasing because of expectations of a bigger role for the startup sector coming from the so-called fourth industrial revolution.

Startup investment globally was estimated to have reached 158 trillion won in 2015, up 45 percent from 2014. The United States pulled in the biggest share of 67 trillion won as of 2015.

In terms of the pace of growth, China is more impressive. China invested 51 trillion won in startup enterprises in 2015, more than double the previous year. Korea’s investment of 2 trillion won is pitiful compared to its gross domestic product.

Korean startups pulled in 2 billion to 3 billion won on average, which is just one tenth of what their American and Chinese companies drew. Korean startup enterprises demand a lot more investment to become competitive against their foreign peers.

Korea pledges to be active in startup funds and investment this year as well. The government must stay at the forefront of investment and support through tax incentives, angel investors and startup investments to encourage bolder commitments from the private sector.
Adventurousness and risk-taking with innovative ideas and bold investment can build global brands among Korean startup companies.
Translation by the Kore JoongAng Daily staff.