A new breed of neocons

A new breed of neocons 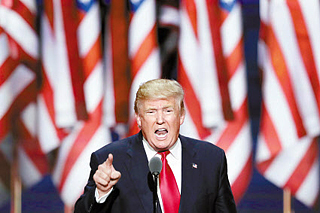 One of the key words from George W. Bush’s presidency was “neoconservative.” The neocons were the warriors who believed in conservative philosophy and divided the world between good and evil. To them, Iraq, Iran and North Korea were the “axis of evil.” The United States waged a war against Iraq, and while Saddam Hussein was toppled, the Sunni militants who had backed him went underground before becoming what is today the Islamic State.

Under Donald Trump, the neocon style is coming back. The security-focused neocons had disappeared after the Iraq War turned into a failure. Only a handful of them remain in think tanks in Washington. But the Trump administration reminds us of the neocon style in two ways.

The first is dichotomy. The neocons divided the world into good and evil. The Trump administration uses American interests as a yardstick.

The second is advocacy of unilateralism relying on power. Both the old neocons and Trump administration use strength to attain their goal. The new breed of neocons focus on national interests.

In the Trump administration, China, Iran and North Korea are equivalent to the Bush administration’s “axis of evil.” China cannot be trusted because of unfair trade, the South China Sea dispute and its relationship with North Korea. The Iran deal that the Obama administration signed is fatally flawed because it underestimated Iran’s nuclear ambition. North Korea is considered a major threat as it dares to strike the U.S. mainland. Trump’s nominees for cabinet positions have revealed such views at their confirmation hearings.

In his inaugural speech, Trump said, “From this day forward, it’s going to be only America First. … For many decades, we’ve enriched foreign industry at the expense of American industry. … We’ve defended other nations’ borders while refusing to defend our own.” These expressions are unheard of in the modern history of the United States. It sounds more like America Only — in which the United States becomes the sole prosperous nation in the world — than America First, which prioritizes U.S. interests in all policies.

Until now, America’s power has convinced nations around the world to voluntarily follow its lead. The United States has emphasized democracy and human rights and encouraged the freedom of speech and assembly. But the new America seems to choose physical force over the power of persuasion.

The shift will bring a chain reaction to pursue power all around the world. There had been a time when neighbors of the Korean Peninsula moved with their own motives and clashed with force. The contest of powers in the late Joseon Dynasty has returned.


*The author is the Washington correspondent for the JoongAng Ilbo.