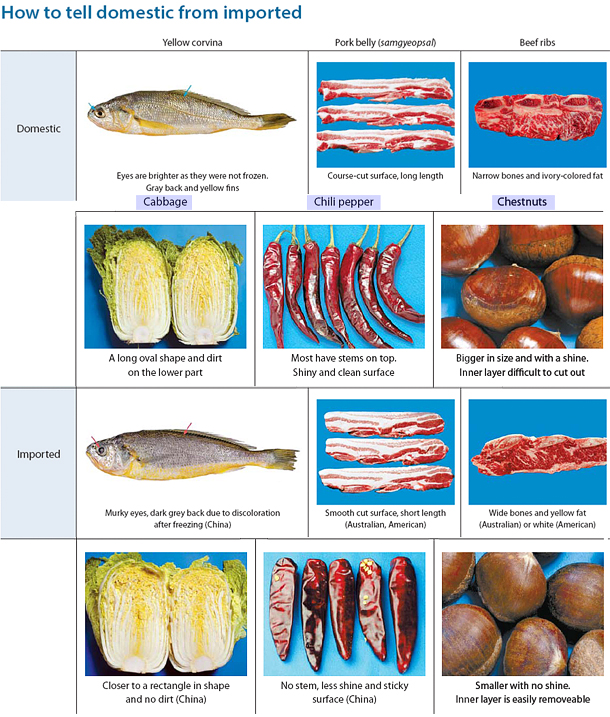 Cho Kyung-ja, a 60-year-old homemaker, frequents the traditional market near her home in Bucheon, Gyeonggi. Prices are cheap compared to discount chains, and she can bargain them down even lower. However, Cho sometimes wonders whether the vegetables labeled “domestic” at market stalls were indeed grown in Korea.

The peak period for sales of groceries are the days before the Lunar New Year, and misrepresentations of where foods come from are common - especially whether they are domestic or imported.

“The methods of bypassing origin marking regulations are getting more cunning all the time,” said Ahn Chang-geun, an official at the National Agricultural Products Quality Management Service (NAQS). “Some merchants sell imported groceries as domestic on holidays or at night because they know inspections rarely take place at that time. There are even cases in which merchants put domestic groceries on display in their stalls but switch them with imported produce when customers ask for them to be delivered to their homes.”

He added that some imported products are indistinguishable from those cultivated in Korea.

Pork is the most commonly caught misrepresented item. It is also the hardest to tell the difference between imported and Korean. The old equation of “frozen is imported and refrigerated is domestic” is long gone. For samgyeopsal, or pork belly, the distinction is even harder because there is no difference in the color of muscles or fat. One subtle distinction is the cut surface. Korea’s samgyeopsal is uneven as it is often cut in long slices to include other parts like the sirloin. Butchers try to sell samgyeopsal in the largest size possible due to its popularity among Korean consumers.

American and Australian samgyeopsal, on the other hand, are usually shorter and don’t include other parts. Therefore their surface cuts are even. For Boston butt, focus on the layer of fat. Korean pork has thick and distinct fat layers whereas pork shoulder from the U.S., Canada and Chile has thinner layers of fat with blurrier boundaries.

Beef ribs, which are popular gift items for the lunar holidays, can be distinguished by their bones. If the bones are narrow and thin, it’s a Korean product. If they’re wide and thick, there’s a high possibility they’re from Australia or the U.S. Imported beef can be distinguished by the color of fat layers: Australian beef has a yellow undertone and American is white.

Consumers can also use a website for tracing serial numbers of animal products: aunit.mtrace.go.kr. Type in the 12-digit number on the package and if the date of butchery and product category doesn’t show up or don’t match those on the package, the product you’ve picked up is imported and mislabeled.

The easiest way to distinguish garlic and cabbage is to check the lower part of the vegetable. If it is clean without a spot of dirt, there’s a high possibility it was shipped from China. Domestic garlic is distributed with roots but Chinese are sold without. So too for onions. If most of the long roots are attached, they’re Korean. If they’re cut short, they’re probably from China.

Jujubes, one of the most popular fruits during the holiday, differ in color according to the origin. Korean jujubes have a bright reddish-brown skin and a bright brown pulp. The color of Chinese Jujubes, both inside and out, are much darker.

Eggs are simple to distinguish: American eggs are white, Korean eggs are brown. What consumers should be wary of are eggs that have fine cracks on the surface, which are unsafe to consume. If spotting cracks is too difficult a task, it is safe to choose eggs that have numbers and letters printed on the shell. They signify that the eggs were verified by the Korea Institute for Animal Products Quality Evaluation.

Fish is even harder to differentiate than meat. There have been a handful of cases of Chinese yellow corvina being distributed in Korea as domestic products. If the corvina does not have a diamond-shaped bump on the eye, it’s not Korean. As they are frozen while imported from China, Chinese yellow corvina have darker backs and brighter gold on the stomach as well.

Consumers can report false origin marking by telephoning the NAQS at 1588-8112 or posting a message on its website: www.naqs.go.kr. Rewards of up to five million won ($4,300) can be paid.