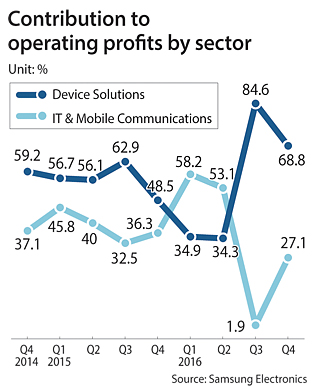 Samsung Electronics said its operating profit rate reached 17.4 percent in the fourth quarter of last year, the highest since 17.2 percent in the third quarter of 2013, buoyed by strong sales of memory chips and displays.

The operating profit margin at the world’s No. 1 smartphone producer is narrowing the gap with archrival Apple, which registered a 27.8 percent operating-profit-to-revenue rate in the July-September period of last year, the latest data available. That number is expected to slide to the low 20 percent range for the fourth quarter.

Apple’s margins were once triple that of Samsung’s.

The Korean tech giant announced Tuesday revenue for the October-December period of 53.33 trillion won ($45.74 billion), up 0.03 percent from a year earlier, and operating profit of 9.22 trillion won, up 50.11 percent.

Its Device Solutions division, which includes semiconductors and displays, was the biggest contributor to the upbeat results, which followed the massive recall of the faulty Galaxy Note7 phablet earlier in the year.

Revenue from the Device Solutions division was 22.26 trillion won, trailing the smartphone-making IT & Mobile Communications division’s 23.61 trillion won in the fourth quarter. But the former’s contribution to the operating profit pie was 68.8 percent versus the latter’s 27.1 percent.

Still, operating profit at the smartphone-making division grew 25 times from 100 billion won in the previous quarter, which was affected by the recall of 2.5 million units of the Note7 phablet. The recovery owes a lot to buoyant sales of older models such as the Galaxy S7 and its Edge cousin as well as medium-priced models under the A and J lineups. Samsung said it sold 90 million handsets, including 64 million smartphones, in the fourth quarter.

The prices of DRAM and NAND flash memory chips have surged as sales of the smartphones, laptops and cloud servers that use them grew in the latter half of last year. DRAM prices, in particular, have been rapidly rising after rebounding in summer.

Market researcher DRAMexchange said in a Jan. 10 report that DRAM prices would significantly increase in the first quarter of this year and an undersupply of DRAM products may last throughout the year due to strong demand growth in mobile and server application markets.

The profitability at the world’s top memory chip maker is also indebted to its hefty investment in facilities. Out of a total facilities investment of 25.5 trillion won in 2016, 13.2 trillion won went into chip factories. Samsung has yet to unveil its investment plans for this year.

Yi of Samsung said a stronger U.S. dollar against the Korean won in the fourth quarter resulted in some 300 billion won worth of profit. The won, which hit 1,100 per dollar at the end of third quarter, weakened to as much as 1,200 won near the year’s end. Components such as chips and displays from the export-reliant company are traded in dollars.

Propped up by positive earnings, Samsung’s board of directors Tuesday vowed to buy back 9.3 trillion won of its shares. The first phase of the buyback period will last for three months starting from today, and the Suwon-based company expects to buy back and cancel 1.02 million common shares and 255,000 preferred shares.

The board also approved a year-end dividend of 27,500 won per share for common shares and 27,550 won for preferred shares. Including the interim dividend, the annual dividend per share increased by about 36 percent.

The decision comes after Samsung announced last November a “shareholder value enhancement policy” to apply 50 percent of its free cash flow for 2016 and 2017.

Shares of Samsung advanced 0.26 percent to close at 1,908,000 won on Tuesday and analysts predict the price will surpass 2 million won soon.