‘Clowns in the background are just as important’

‘Clowns in the background are just as important’ 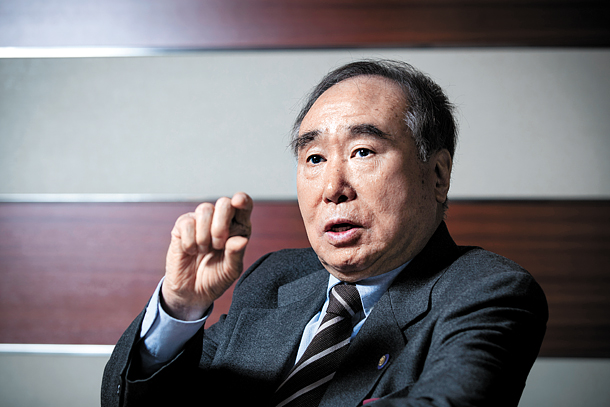 When conductor Chung Myung-whun won a prize in the 1974 International Tchaikovsky Competition, he received a heroes’ welcome in an open car parade leading from Gimpo International Airport in western Seoul to Seoul City Hall in the center of the capital.

The 82-year-old man is still up and running after his 20-year stint as a public official. Lee, who now serves as head of Dankook University’s Graduate School of Culture and Arts, leads 12 regular meetings and routinely delivers speeches at various culture-related events.

But the current abuse of power scandal involving President Park Geun-hye and her confidants has demoralized him and his colleagues in the culture sector, as multiple cultural figures have been found to have played key roles.

The JoongAng Ilbo sat down with Lee to discuss the role of public officials in culture and his thoughts on the ongoi
ng political scandal.

Q. You have described yourself as “a clown in the background.” What does this mean?

A. Actors are “front clowns.” But there are people like me who work as culture ministry officials or operators of performances behind the spotlight, and we are clowns behind the curtain. These clowns should devote themselves to supporting artists and cultural figures instead of pitching themselves as heroes. I have worked with a number of actors, musicians and producers. Those who become A-list stars usually fly away like birds and rarely contact me. But we should not be disappointed. I contributed to creating countless stages and the stages helped me become who I am.


That sounds very suggestive of the roles public officials have in culture and the arts.

We have become too sensitive about who holds power. There are also a growing number of officials who are too desperate for success. But the essence of sharing and volunteering lies in the genuine attitude where one speaks candidly regardless of positions and situations.

I tried my best to help artists and then kept distance. This is good for them and, of all things, me. I always keep in mind that the lives of culture ministry officials are not fancy.


What is the biggest difference between 20 years ago and now?

In the past, Korea had no foundation for its modern art and culture and just started laying ground for that. So officials at the Culture Ministry retained great enthusiasm and a sense of duty. In 1972, just before the Munich Olympics, then-President Park Chung Hee and I participated in a cherry blossom festival held in Jinhae, South Gyeongsang.

The president really hoped to promote Korean culture during the Olympics, so we had long discussions on the issue. But people capturing the moment spread a rumor that I am the one who is in power, being close with the president.

After learning of the rumor, I got into a panic rather than being proud. If I enjoyed that, I could become like Choi Soon-sil.


The Culture Ministry is devastated because of the scandal. How do you feel about that?

There is a gathering where high-ranking officials from the Culture Ministry met. When I go there, the atmosphere is really down. If a boss orders something unfair, one should have courage to speak out.

I don’t know whether it can be a good example, but when I served, many junior officials had a lot of guts. If the culture minister abruptly gave notice of a luncheon meeting, some of them would tell him that they had appointments. I also brought up issues to the minister that I thought needed to be corrected.


The Ministry of Culture, Sports and Tourism is a government body that oversees culture, sports, tourism and media. Since it handles broad sectors, some feel it has loose authority and lacks responsibility. What do you make of this view?

The Ministry of Culture and Public Information operated in a stable manner in the 1980s. But as the culture and tourism sectors were merged, the organization became rather loose and fragmented. Above all things, some people look at the culture ministry with disregard, assuming that anyone can go there and work.

Those in power often placed their aides in the ministry. The culture ministry has the most outside ministers and vice ministers. As Korean culture gained wider attention, the popularity of the ministry also rose. But it is a letdown to see what is happening now.

But I believe we can turn this into an opportunity. In the wake of the scandal, the ministry has become the subject of scrutiny for any potential bribe and power abuse. The ministry could make progress, depending on how it responds to the crisis.


How can the arts and culture fields become more independent of external power?

First of all, public officials and those who work in public agencies should think that they work on behalf of the public. More precisely, taxpayers. I was among the candidates to head a body under the culture ministry in the Lee Myung-bak administration. But I could not make it.


As with the blacklist scandal, some actors or artists fall victim, depending on the ideology or political orientation of the president. What is the ideal way to address the issue?

The act of blacklisting actors based on their presumed faith or political orientation violates the essence of rule of law. When liberal-leaning presidents took office, the Korean People Artist Federation [left-leaning cultural association] gained more influence. When a conservative administration took over, other groups emerged. The blacklist is in line with this tendency. One of the worst cultural policies is to suppress artists’ works based on politics. It is not the government’s job to decide the value of art.