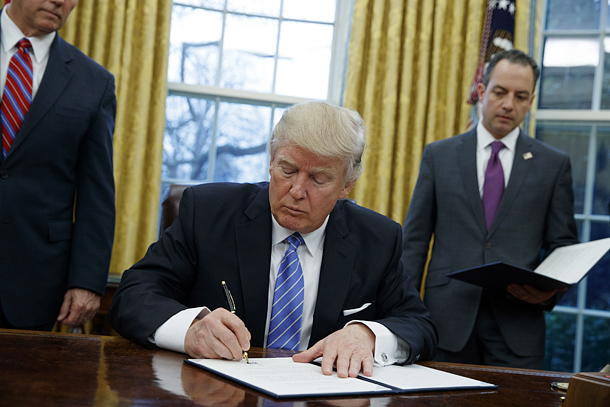 U.S. President Donald Trump signs on Monday an executive order to withdraw the United States from the 12-nation Trans-Pacific Partnership trade pact agreed to under the Obama administration in the Oval Office of the White House in Washington. [AP/YONHAP]

Even though he is now the president of the United States and will wield power over the world at large, in the eyes of Donald Trump, it’s only American interests that matter.

But there was the expectation that the candidate Trump and President Trump would be different.

That expectation has proven to be a fantasy, however, as shown through Trump’s inauguration on Friday.

This is odd for a U.S. president’s inaugural address. Other than stating that jobs will be increased in America, he did not propose what direction the United States will go. The inauguration speech itself was reminiscent of a college speech contestant, with no vision and no philosophy.

Thus, the Trump administration’s foreign policy, including policy toward the Korean Peninsula, can only be read as a reiteration of his remarks and messages during his election campaign and over Twitter.

While it is said he has opened the age of uncertainty, there are two aspects that clearly come to light.

First, his European policy is chauvinistic. He welcomed the United Kingdom’s Brexit to shake up the European Union and called the North Atlantic Treaty Organization (NATO) obsolete.

But it is not clear what his goal is for the European Community, which has been a pillar of stability and peace, or NATO, which has supported defense and security. A weaker Europe only serves Russia’s interests.

Then there is the Trump administration’s Northeast Asia policy, with its clear goal of keeping China in check. One way is in economic terms. The United States’ trade deficit with China is around $90 billion. Trump believes this is because China manipulates its currency, so he wants to pressure China for a currency appreciation to improve the trade balance.

Second is the strategy in the Pacific. Along with Japan, he plans to suppress China’s militarism in the East and South China Sea. Trump naming Rex Tillerson as his secretary of state, Putin’s close friend, is also unusual. China’s neck is gently being squeezed.

But the U.S. and Chinese trade scale is over $500 billion and China owns about $1.2 trillion in U.S. debt. Trump, who is a savvy businessman, has suggested that a one-China policy may be negotiable in order to pressure Beijing, but the United States and China cannot enter a trade war or a military clash in the South China Sea, which will lead to joint destruction.

The foreign affairs and security line’s deputy secretaries and senior officials will be filled with neoconservatives who may call for North Korea’s collapse and preemptive strikes.

Given that North Korean leader Kim Jong-un fires missiles as if putting on a fireworks show, and is preparing for a sixth nuclear test, a strong and clear deterrent is the only countermeasure.

However, a policy based on the premise of the collapse of North Korea is not a policy. A preventative attack on North Korea’s nuclear and missile facilities, or a preemptive strike, is only permissible when it is certain that Pyongyang is showing signs of attack, whether it is a limited or all-out war.

South Korea welcomes the deployment of cutting-edge U.S. strategic assets on the Korean Peninsula, but does not want the United States to act on North Korea without the consent of Seoul.

A preemptive strike means that the Korean Peninsula will become a battlefield, and in the event of war, odds are high it will be a nuclear war.

Our lives and assets cannot be sacrificed for the U.S. military industrial complex. We cannot let the Korean Peninsula fall to ruin again.

During his election campaign, Trump said he is willing to hold talks with Kim Jong-un over hamburgers. Because of harsh words toward North Korea afterward, the hamburger talks were pushed aside. But Trump and Kim have similarities, especially in terms of their volatile dispositions, so neither a policy of sudden talks nor preemptive attacks can be excluded.

The Barack Obama administration’s policy of “strategic patience” over the past eight years is finally coming to an end. Trump’s foreign affairs and security team is expected to pour more attention on Northeast Asia, where the goal and means is clear.

The Trump administration requesting more aggressively for China to deter North Korea is encouraging to see, but it should not expect this for free.

When Trump and Chinese President Xi Jinping move, this creates an opportunity for Korea.

There is also room to put to use the strengths of yet another alpha dog, Putin.

At a moment when everything is fluid and uncertain, as it is now, diplomacy is necessary. The alpha and omega of this diplomacy is the goal of prevention of war and the peaceful denuclearization of North Korea.