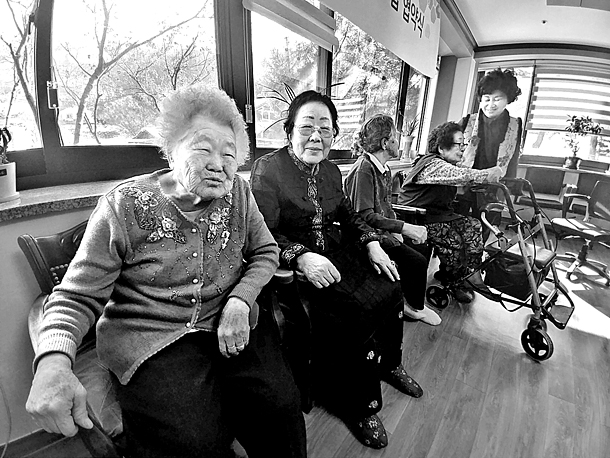 Victims of Japanese wartime sexual slavery, euphemistically referred to as comfort women, voice their opposition to having a statue of a comfort woman installed on the Dokdo islets, during a conversation with the JoongAng Ilbo on Monday at a community center for comfort women in Gwangju, Gyeonggi. [KIM MIN-WOOK]

A group of victims of Japanese wartime sexual slavery, euphemistically referred to as comfort women, objected to establishing a statue for them on the Dokdo islets.

“We agree that more statues of a young girl must be erected in Korea and even outside of Korea to help the people remember what happened,” Lee Yong-soo, an 88-year-old resident of a community center for comfort women in Daegu, told the JoongAng Ilbo on Monday. “But this is just not right. It’s also baffling to hear that council members are in charge of the idea. We’d rather ordinary citizens take up the case.”

A group of councilmen of the Gyeonggi Provincial Council announced last week their intention to raise funds to put a statue representing comfort women on the Dokdo islets to celebrate the sixth anniversary of the first bronze statue of a young girl, called the Peace Monument, installed in front of the Japanese embassy in Seoul in 2011, which has become an international symbol of the victims’ cause.

Seoul says there is no dispute over Dokdo, a part of Ulleung County in North Gyeongsang, either in terms of history, geography or international law.

Ahn Shin-gwon, the head of the community center in Gwangju, lamented that the move to establish a statue on Dokdo islets has brought confusion by mashing the two issues - comfort women and Dokdo - together.

“The issue of comfort women is a human rights matter that has won support from the international community,” Ahn explained. “The move to establish a statue on Dokdo has now got the Japanese government involved, and conservatives in Japan will use this issue to gain public support.”

“The Gyeonggi Provincial Council pushed forward the fundraising to establish a statue for comfort women in Dokdo without consulting any civic group,” he added. “It’s hard to see that their move is for human rights.”

Experts and some civic activists for Dokdo have also objected to the Gyeonggi councilmen’s plan.

“Combining the Dokdo issue with the comfort women issue is only making things worse,” said Lee Sung-soon, head of the Korea Chongshindae’s Institute, a think tank researching the history of comfort women. “The victims of Japanese wartime sexual slavery do not want the issue to be even more tangled than it is, but merely wish for a sincere apology from the Japanese government.”

Some pointed out the lack of practicality in maintaining a statue on the islets.

“If a statue is established on the islets, it will be covered in seagull excrement very soon,” said Kim Jeom-gu, head of a civic group for Dokdo called the Party for Tokdo Protection. “It will be covered in salt from the sea waves, and it will hardly be cleaned because one can enter the island only 160 days out of the year.”

The Gyeonggi councilmen’s fundraising was put on hold for violating the Act on Collection and Use of Donations, which forbids the central and local governments and public officials from collecting donations.

“Given that the provincial council cannot fundraise for the cause, we plan to have a civic group do it instead,” said Min Kyung-seon, a councilman of the Gyeonggi Provincial Council. “We will open discussion with the general public and meet with the victims of Japanese wartime sexual slavery to explain to them the need to establish the statute on Dokdo islets.”