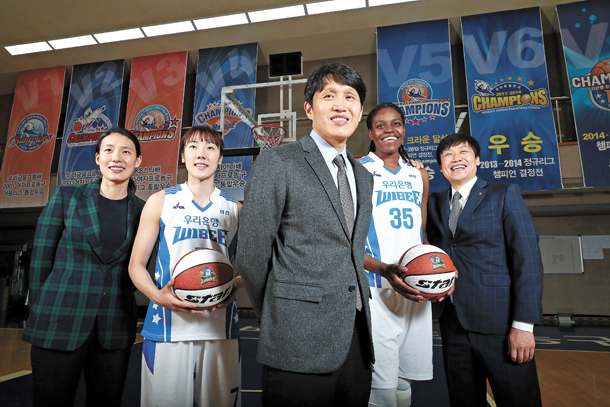 The practice court for the Asan Woori Bank Wibee of the Women’s Korean Basketball League (WKBL) is known for its strict and cold atmosphere.

When players make mistakes, Wie Sung-woo, Wibee’s head coach, doesn’t shy away from correcting them in a tough manner. Looking at their practice alone, it is as if the Wibee are stuck at the bottom of the league standings, yet they’ve won both the regular season and the championships five years in a row now.

“I make the practice strict because I don’t want my players to get yelled at by fans,” Wie said. “They are like my children.”

That may be the result of their outstanding 2016-2017 season. The team finished the regular season with a record of 24 wins and 1 loss.

They recorded a 95.8 percent winning average and won 10.5 more games than the second-ranked team in the league, Yongin Samsung Life Blue Minx.

And the Wibee are counting the days until they win yet another championship trophy this year. After all, they have already gained berth into the playoffs regardless of the results from the remaining matches this season.

Fans are also looking into the winning average. Their winning percentage of over 90 percent is rare in professional sports.

The highest winning rate was Incheon Shinhan Bank S-birds’ 92.5 percent (37-3) during 2008-2009 season. Woori Bank will set a new record if they finish 10-1 in the next 11 games scheduled throughout the season.

“After we won both the regular season and the championship game with coach Wie for the first time, many people asked me how,” Park Hye-jin, one of the team’s guards, said. “When I told them it was the strict training, all the other teams increased their practice time.”

Park added, “But I think it’s more of ‘how you practice’ rather than ‘how much you practice.’” During practice, Wie tries to get the most out of his players. In every practice, he pushes them to play like it’s an actual game.

“Other teams can imitate our practice, but they can’t be the same,” Wie said.

“The strength of this team is that the players know their role,” Chun Joo-weon, assistant coach, said. “My role is to make the players understand their mistakes after they get yelled at by coach Wie.”

In regard to comments that women’s basketball is no longer fun because Woori Bank is dominating the league, Wie said, “I do feel a bit responsible, but I have no intention of changing the team’s management. We are professionals and we need to compete. If the other teams can’t keep up, it’s their fault.”

At this point, Woori Bank’s regular season victory seems like an inevitability.

“I definitely want to set a new record for the best winning percentage,” Wie said. “After I came to Woori Bank, I led the team to win both the regular season and the championship game for four seasons in a row. The secret to success every season was not to ask for more. It’s just the same with the winning rate. I will patiently wait to reap what I have sown.”