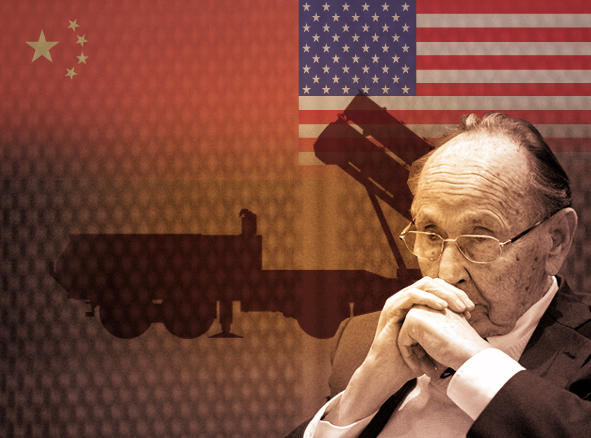 “History does not repeat itself, but it rhymes,” Mark Twain once said. Will the Thaad missile defense system, which will affect the future of the Korean Peninsula and Northeast Asia, rhyme with the treaty 30 years ago to remove intermediate-range nuclear missiles?

In 1977, at the height of the Cold War, the Soviet Union deployed intermediate-range nuclear missiles like the SS-20 in the western region to reach Western Europe. In response, NATO deployed Pershing II missiles from the United States. As the arms race escalated, U.S. President Ronald Reagan made a “zero option” proposal calling for a hold on U.S. deployment of missiles systems, reciprocated by the Soviets’ elimination of its missiles.

The deal was signed in 1987 after six years of suspension and resumption. Elimination of all missiles with a range of up to 5,500 kilometers (3,400 miles) deployed by both the U.S. and Soviet Union was completed by 1991. It became a landmark event for the end of the Cold War and German reunification. The historic agreement wouldn’t have been possible without the help of West German Chancellor Helmut Kohl and Foreign Minister Hans-Dietrich Genscher, who coordinated public opinion through a social-liberal coalition.

West Germany felt the future of Germany depended on detente between West and East Germany and unilaterally eliminated the Pershing missiles deployed in Germany, which became the first step for negotiations. In the process, Germany displayed diplomacy that did not disappoint either Washington or Moscow. The neutral diplomatic stance of Genscher, who served as interior minister for five years and as foreign minister for 13 years, is called Genscherism.

The latest Thaad controversy is a different situation, but the overall composition is similar. Korea’s objective is the same. Seoul should work to eliminate nuclear missiles and their delivery system and pursue detente between South and North Korea and between the United States and China. In Northeast Asia, there are signs of an arms race between the U.S.-Japan-Korea camp and China-Russia-North Korea camp. North Korea has been under China’s shadow and pursuing nuclear missile development. Fundamentally, the door to resolution will open when Washington and Beijing reach an agreement. It is South Korea’s role to act as a catalyst just as West Germany had been.

Some argue that Thaad deployment has already been decided and cannot be retracted or delayed because of China’s opposition. Others say Thaad has no actual benefits for inter-Korean relations or national security and only aggravates South Korea’s relationship with China. The old arguments of pro-America vs. pro-China and siding with the powerful vs. self-reliance are escalating. In West Germany, the Eastern policy pursued by the social-liberal coalition since 1969 continued with the Christian Democrats-Free Democrats coalition in 1982.

What should we do now? It would have been better if South Korea had made more effective diplomatic efforts for a resolution on the nuclear crisis before deciding on Thaad deployment. But we still have options. If a more serious nuclear negotiation begins, the justification for deployment could diminish. China should effectively persuade North Korea and seek coercive measures if necessary. South Korea and the U.S. must have confidence that China can play such a role and provide time and space to help. The North Korean nuclear missiles that Thaad is supposed to intercept are not even deployed. The United States understands that.

There is no reason not to put all available cards on the table, including suspension of North Korean nuclear and missile tests, modification of U.S.-South Korea joint military drills, easing of sanctions, inter-Korean talks and U.S.-North Korea talks. South Korea and the United States should specifically offer realistic negotiation conditions that can realize a “zero option” proposal similar to one made 30 years ago in Europe.

Then, even if Thaad deployment is finalized, we have legitimate justification.

China should also stop pressuring South Korea through economic retaliation. The tactic to loosen the South Korea-U.S. alliance by using Korea’s domestic situation will not be respected by Asian neighbors.

Most of all, Korean politicians are pathetic to be divided into pro-U.S. and pro-China groups without reaching a unified front domestically. Internal integration is the priority. Seoul has to deal with North Korea, which uses all possible means for regime survival; China, which considers North Korea’s collapse a greater threat than a nuclear program; and the United States, which prioritizes building a system to check China in East Asia. Protecting national interests with a divided nation is a fantasy.

The age of strongmen — Donald Trump, Xi Jinping and Vladimir Putin — has begun. In 1981, when the “zero option” deal started in Europe, Ronald Reagan, Leonid Brezhnev and Margaret Thatcher were active. What brought them together was the flexible policy of Germany. What Korea needs today is internal unity and diplomatic flexibility.


*The author, a former minister of foreign affairs, is president of the University of North Korean Studies.