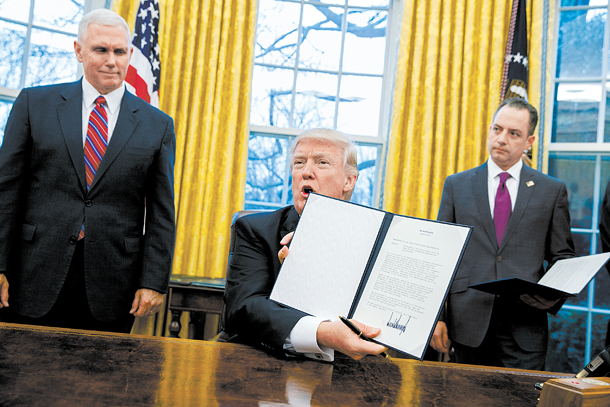 In this file photo from Jan. 23, U.S. President Donald Trump shows off an executive order withdrawing the U.S. from the 12-nation Trans-Pacific Partnership trade pact in the Oval Office of the White House in Washington. [AP/YONHAP]

Within the first five days of his inauguration, U.S. President Donald Trump announced plans to renegotiate the North American Free Trade Agreement and withdrew the U.S. from the Trans-Pacific Partnership.

“Much stronger and faster than expected,” said Ahn Se-young, a professor of international trade at Sogang University.

“Many expected Trump’s radical promises would slow down once he actually stepped into the presidency, but the last few days proved them wrong,” Ahn said.

With Trump making good on his protectionist promises, Korea must come up with its own set of countermeasures. The first and foremost risk is to the free-trade agreement between the U.S. and Korea.

“Based on the current pace, the U.S. may request FTA renegotiations sooner than expected,” said Park Sung-hoon, a professor of economics at the Korea University Graduate School of International Studies.

On Tuesday, Deputy Trade Minister Lee In-ho boarded a plane to the U.S. to open discussions on bilateral commercial connections between the two countries. As soon as Trump’s nominee Wilbur Ross steps into the office of Commerce Secretary, the Korean government will organize a meeting with him and Trade Minister Joo Hyung-whan.

The U.S. has two major dissatisfactions with its FTA with Korea. The first is the trade imbalance. Last year, Korea chalked up a current account surplus of $23.3 billion with the United States. That was lower than 2015’s $33.8 billion, but it is still big.

The Korean government plans to highlight the mutual benefits from the Korea-U.S. FTA and its efforts to shrink the surplus by importing American shale gas.

“The Trump administration’s immediate targets are Mexico and China, which means Korea is left with a little more time to prepare,” said Cheong In-kyo, a professor of economics at Inha University.

Second on the list are regulations that the United States have branded as Korea’s “insufficient fulfillment” of the FTA, such as opening its markets for legal services and enhancing the clarity of investigations conducted by the Fair Trade Commission.

“Factors that the U.S. has already criticized in the past are likely to be attacked in a stronger way,” said Jang Sang-sik, a researcher at the Korea International Trade Association. “We need to collect opinions from both the U.S. government and American companies to understand their demands and come up with a counterplan.”

Korea is not the only country worried by Trump’s swift moves over the last few days.

The U.S.’s 11 former TPP partners - which include Canada, Mexico, Chile, Peru, Japan, Australia, New Zealand - are struggling to come up with a back-up plan for the pact after the U.S.’s departure. Their first and immediate reaction was opposition. Australia sent a message to invite other big countries such as China and Indonesia to join the partnership. According to foreign media outlets including Reuters, Australia’s Prime Minister Malcom Turnbull said in a phone call with Japanese Prime Minister Abe Shinzo that he wanted “to push forward plans for TPP without the U.S.” New Zealand stands by Australia.

Chile’s Foreign Affairs Minister Heraldo Munoz said Monday he wanted to continue trade negotiations through the TPP even if the U.S. was out. Chile suggested inviting Korea and China to a summit where TPP members will gather in March.

The blow seemed heavy for Japan as well because TPP was part of Prime Minister Abe’s reflation policy, dubbed “Abenomics.”

Overall, the Trump administration’s core principal of “American First” is throwing the global trade order into disorder. After he signed the order to withdraw the U.S. from the TTP on Monday, Trump said the decision was a “great thing for the American worker.” He highlighted once again that the U.S. would impose a “major border tax” on products manufactured abroad and taken into the country.

Nafta is an accord signed by the U.S., Canada and Mexico in 1994. Renegotiations can be opened up on the request of any of the three countries. If the countries fail to reach an agreement within the first 180 days of discussion, that country is allowed to withdraw. Trump asserts that a number of products currently made in Mexico should be manufactured in the United States. He has threatened a 35 percent tariff on products made in Mexico and brought into the States.

The Trans-Pacific Partnership was supposed to be a free trade agreement of 12 Pacific rim countries. During his presidential campaign, Trump called the TPP a “potential disaster.”

Meanwhile, there are still voices of concern in Washington regarding withdrawal from the TPP. Republican Senator John McCain called Trump’s decision a “serious mistake” that may eventually strengthen China’s economic influence in the Asia-Pacific region. His logic is that although pulling out from the TPP may seem favorable for Americans who immediately face job shortages, it may turn out to benefit rival China in the long run.

Zhang Jun, a senior official of the Chinese Foreign Ministry’s international economics division, told foreign reporters in Beijing on Monday, “If it’s necessary for China to take on the role of world leadership, China will indeed accept that responsibility.” General Secretary Xi Jinping of China compared protectionism to “voluntarily locking the country inside a dark room” at the Davos Forum last week, as if China was the new guardian of global free trade.

The Trump administration’s objective is not making a fixed set of rules that would apply to each country, but making deals case by case. The Wall Street Journal assessed the strategy to be a method to maintain the U.S.’s power in each market and maximize the country’s benefits.

Trump’s plan is not imposing high tariffs on every imported good, but to place them on certain major items, prompting other manufacturers to fall into line. After criticizing several automakers on Twitter, several car manufacturers promised to increase investments in the U.S. Even electronics and information technology companies have started to change plans to keep investments inside American borders.

The next question is whether Trump will brand China a currency manipulator. Even if he does, there’s a low possibility that the two nations will embark on a destructive trade war. This assumption was backed by Trump’s interview with the Wall Street Journal in which he said he will not brand China a currency manipulator on his first day in office and that he wants dialogue with the country first.