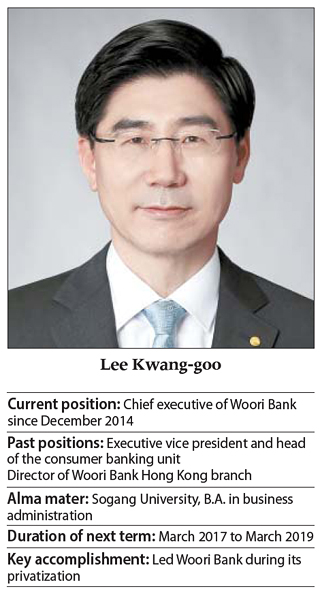 Woori Bank, which was recently privatized, has nominated Lee Kwang-goo for a second term as CEO, the bank said Wednesday.

Lee, the current CEO of the Korean bank who oversaw its privatization, was selected by a committee of outside directors over his competitors Kim Seung-gyu, former executive vice president of the bank, and Lee Dong-gun, head of the bank’s business support group.

“As the first CEO of the newly privatized Woori Bank, I hope to create an exemplary management structure and solidify our footing in the domestic market to ultimately expand our business to Southeast Asia,” Lee said during a press conference Wednesday at the bank’s landmark headquarters in central Seoul.

His confirmation will be voted on during a shareholders meeting in March. Upon final approval, Lee’s tenure will be extended to March 2019.

The committee said it highly regarded Lee’s contribution to the bank’s privatization, which it has been pushing for 16 years, and had no doubts about his management capabilities given his past two years at the helm of the bank. “We expect Lee to provide the bank with direction after it has been successfully privatized,” the committee said.

Lee first began his career at the Commercial Bank of Korea, the predecessor of Woori Bank, in 1979 and has been with the company since, serving various positions including director of the bank’s Hong Kong branch and vice president of the bank.

Under his management as chief executive, Woori Bank’s net profit jumped from 400 billion won ($340 million) in 2014 to 1 trillion won in 2015. In 2016, its profit exceeded 1 trillion won in just third quarters. Market analysts speculate Woori’s profit for the year could be as high as 1.3 trillion won.

One of the pending tasks that will put Lee’s management skills to the test is addressing the bank’s bureaucratic corporate culture. After Woori Bank’s predecessor, Commercial Bank, merged with Hanil Bank, employees from both faced conflicts over management issues. Some say such a culture was the by-product of government control over the bank. “We will have to improve such a system by creating a fair HR system,” Lee said.

Another key project that Lee is likely to focus on is transforming the bank into a holding company to better oversee its subsidiaries. “Once the bank is turned into a financial holding company, our capital adequacy ratio will look better and M&As with subsidiaries will become much easier,” he said.