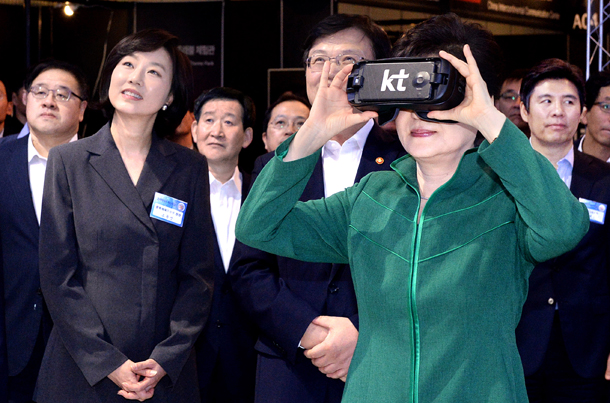 The fate of the current administration will be determined as early as April, and academics and politicians are already making their reorganization plans for government agencies. The main target is “The Ministry of Science, ICT and Future Planning,” which represents the Park Geun-hye administration’s slogan “creative economy.”

While there can be various ways to reorganize the ministry, the key is how to handle science and ICT, the two major branches. It is likely that the word “future” will disappear along with the fate of the Park administration.

Who came up with the unheard-of name “Ministry of Science, ICT and Future Planning” and why? Former Democratic Party emergency committee head, Kim Chong-in, who had served as the head of Saenuri Party’s Special Committee to Promote People’s Happiness during Park Geun-hye’s presidential campaign, told the media that it was the committee’s idea and he approved the name.

The main function of the Ministry of Science, ITC and Future Planning is developing science, information and communication technology and future strategy. In a country struggling with short-term strategies, “future planning” is an ambitious goal to set up medium and long-term planning for 10 years or more into the future.

However, no future strategy could be found in the ministry that was established in the spring of 2013. More than a year and half later, a section titled “Future Strategy Planning,” not a department or bureau, was created. When the current administration began, it had an un-futuristic plan to bring the moon exploration project slated for 2025 forward to 2020. The political motive behind the plan was to have the first rocket test launch at the end of this year, during the presidential election.

The future strategy in this rapidly changing time is like driving a high-tech vehicle equipped with sensors, radars and GPS on a foggy, congested road. The Committee for the Future in the Parliament of Finland discusses the state of the nation 30 years into the future, and an incoming prime minister needs to present the future vision for 15 years later. Each administrative agency needs to establish specific strategies in accordance with the vision.

Scholars analyze that this is Finland’s secret that led to it maintaining a per capita GDP of $43,000 last year even after the fall of Nokia, which made up more than 20 percent of its GDP.

Singapore’s per-capita GDP is also impressive as it, too, is in the top ten, at $53,000, and Singapore also has solid future strategies for the nation.

Korea was once called the Miracle on the Han, but today, its growth engine is cooling down even after 19 trillion won ($16.3 billion) of state R&D funding is invested.

Can the state future strategy survive in the next administration, which will come in as early as June as a result of the failure of the Park Geun-hye presidency?