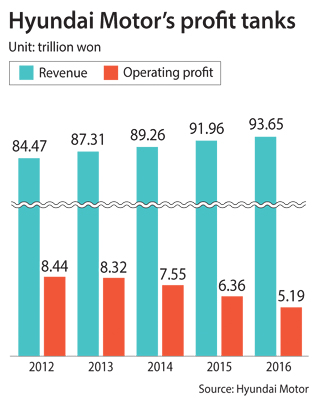 The earnings report was consistent with industry expectations before the release. Hyundai Motor, the nation’s largest automaker, posted a sluggish report card with an 18.3 percent year-on-year drop in profit, though its revenue increased by 1.8 percent thanks to increased sales of its Santa Fe and Tucson SUVs and high-end cars under its luxury brand Genesis. Hyundai’s annual revenue was 93.65 trillion won.

Still, its operating profit was just 5.5 percent of sales, a 1.4 percentage point drop from a year earlier.

“We’ve seen a slowdown in the global auto market last year, which triggered heavy promotions and competition between automakers,” a Hyundai Motor spokesperson said. “Production difficulties due to a prolonged strike [by the company’s labor union in Korea] and the sluggish economies of developing nations also contributed to a sales decline and profit fall.”

Hyundai Motor faulted the massive walkouts by its labor union over wage negotiations as the major reason for its poor performance in the domestic market. The union’s strikes cost the company its largest-ever production loss of 3.1 trillion won and disrupted the manufacturing of 142,000 vehicles, according to company estimates.

Analysts also pointed to the lack of competitive car lineups last year and the rise of competing models in the country such as the Malibu from GM Korea and SM6 from Renault Samsung Motors as another reason for Hyundai losing ground in Korea.

“Market demand these days is centered on bigger cars like sport utility vehicles,” said Lee Jung-hoon, an analyst at Yuanta Securities. “Even among sedans, customers prefer larger models like the Grandeur. But Hyundai Motor’s flagship full-size Grandeur IG sedan was released late in the year in November, and the carmaker did not have any new SUV releases.”

This year poses more challenges for Hyundai Motor as the global economic slowdown continues and a new administration in the United States under President Donald Trump pushes ahead with protectionist policies against foreign companies. “Tough market conditions are expected,” said Koo Za-yong, Hyundai Motor’s vice president in charge of investor relations. “We will respond by improving competitiveness in our product lineups, releasing new cars and revamped cars and expanding SUV supply.”

“We will also closely monitor Trump’s moves to minimize influence on our overseas sales,” he added.

Hyundai is scheduled to launch a facelifted version of its flagship Sonata sedan by the first half of the year. The company is also preparing its first compact SUV model under the project name OS.

The luxury brand Genesis will launch the G70 midsize sedan this year, and to cater to increased demand for SUVs, the automaker will expand production of its Santa Fe SUVs from 32,000 cars to 65,000 this year at its Alabama plant in the United States.

“Hyundai hit the bottom last year, but after the release of the Grandeur, the situation has been clearing up,” said Esther Lim, an analyst at Samsung Securities. “This year will be a better year for the company with a list of improved car lineups.”