Teenie Weenie deal is a big one

Teenie Weenie deal is a big one 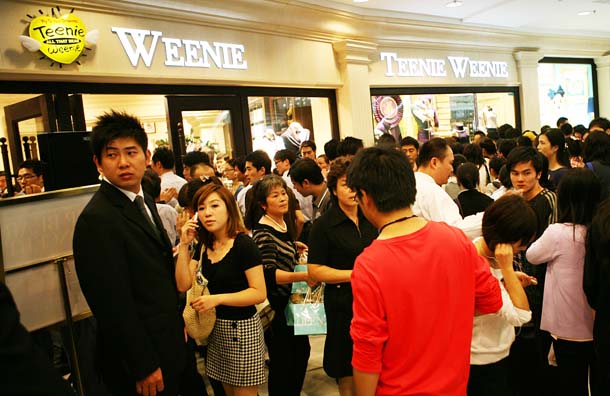 A Teenie Weenie store is packed with visitors during its opening at a shopping mall in Shanghai in 2013. Korean retail conglomerate E-Land Group, the owner of the Teenie Weenie brand, announced Wednesday that it had closed a deal with Chinese fashion company V-Grass to sell the apparel brand for 877 billion won (752 million dollar). [E-LAND GROUP]

The deal with V-Grass represents the biggest cross-border merger and acquisition agreement in Korea’s fashion industry.

E-Land Group said proceeds from the sale will help the company reduce its debt level to 240 percent by the first quarter from the current level, which is above 300 percent.

The final price is lower than the previously reported range of 1 trillion won. “After we adjusted our position on the operation of E-Land’s women’s wear unit in China, we finally agreed on the deal,” said a source at E-Land familiar with the deal.

The company said that since Teenie Weenie’s book value stands at 120 billion won, it would obtain a profit worth 750 billion won through the sale.

However, it will still own 10 percent of the fashion brand’s shares for three years to “maintain a stable partnership” with the Chinese company. “The reason why E-Land keeps a 10 percent stake is that both companies need to cooperate on production and business and generate synergy after the deal,” E-Land said in a statement.

The board of directors at V-Grass passed the takeover agenda on Tuesday, and the shareholders are expected to cast a vote on Feb. 10.

Following the decision, the Chinese retailer is expected to pay the price for sale on Feb. 20.

The Nanjing-based company captured Chinese consumers’ shifting purchase behaviors in favor of more premium brands. But since the sale price is higher than its market capitalization, the company will pay with debt.

On E-Land’s end, the sale is its latest effort to restore financial liquidity. The group had sold three properties in Mapo District, western Seoul, and Gangnam District, southern Seoul, last year, a move that brought in 250 billion won.

The company will push forward to secure cash through sales of other properties. By the first quarter, it will sell 200 billion won worth of real estate and then 500 billion won later this year.

The fashion group also plans to take E-Land Retail public in a capital-raising effort by the first half of this year, a move that E-Land believes will reduce its debt level to 200 percent.

E-Land has been accumulating more debt as some of its brands like New Balance have lost traction among young consumers.

Other analysts believe the group is excessively focused on physical expansion, increasing the number of brick-and-mortar stores even though more are turning to online and mobile shopping.

V-Grass was established in 1997 and specializes in high-end women’s fashion.