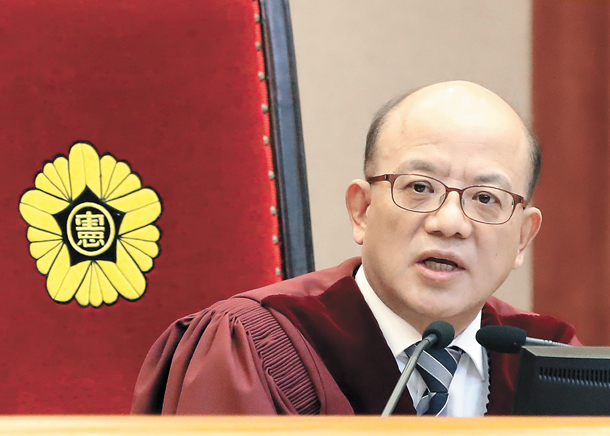 Chief Justice Park Han-chul of the Constitutional Court sets a deadline for the impeachment trial in opening remarks at the ninth hearing Wednesday. [JOINT PRESS CORPS]

The chief justice of the Constitutional Court said Wednesday that the impeachment trial of President Park Geun-hye must be concluded by March 13, before the nine-judge bench will have any more vacancies after his own retirement.

Chief Justice Park Han-chul of the Constitutional Court set the deadline for the trial in opening remarks at the ninth hearing Wednesday.

“Today is my last participation in this trial,” said Park, whose term at the court ends Tuesday. “Another judge [Lee Jung-mi] will also end her tenure on March 13. With two vacancies, the impeachment trial cannot proceed normally, so it must be concluded and ruled on before then.”

Park continued: “The Constitutional Court’s ruling is made through fierce discussions among its nine judges. Each and every judge is extremely meaningful. When one more vacancy is created in addition to mine, it can mean more than just one more vacancy. It may distort the outcome of the trial.”

The court has nine judges, which reflects Korea’s separation of powers. Three are selected by the president, three by the National Assembly and three by the Supreme Court chief justice.

On Dec. 9, 2016, the National Assembly passed a motion to impeach Park for having committed violations of the constitution and criminal laws by allowing a secret inner circle to interfere in state affairs. It also accused Park of having failed to protect the lives of citizens due to nonfeasance during the sinking of the Sewol ferry in 2014. A total of 304 passengers died after a delayed government response.

The Constitutional Court had 180 days - or until June 6 - to rule on the legality of the impeachment. If the court rules to remove Park, a presidential election must take place within 60 days. If the ruling comes out before Chief Justice Park’s March 13 deadline, the election will be held at the end of April or in early May.

If the court upholds the impeachment motion before an independent counsel probe ends at the end of February, Park could be questioned as a suspect in a criminal investigation and face immediate prosecution. She will have lost her presidential immunity from prosecution.

If the court rules against the motion, Park’s presidential powers will immediately be restored, and the next election will take place in December as originally scheduled.

Because the impending vacancies were an issue from the beginning of the trial, Chief Justice Park promised a “speedy and fair trial.” Since then, the court accelerated its deliberations, increasing the number of hearings per week from two to three starting last week.

After Chief Justice Park made public his deadline of the trial, lawyers for the impeached president protested. Lee Joong-hwan said the judge’s remarks were similar to a prediction by Rep. Kweon Seong-dong of the Bareun Party that the ruling would likely come in March - or as early as next month. Kweon is the head of the Legislation and Judiciary Committee and the impeachment committee, which acts as the prosecution in Park’s impeachment trial.

“If the court is just repeating the National Assembly’s opinion, I have to question the fairness of the trial,” Lee said.

Judge Park reacted angrily. “I cannot tolerate such an argument,” he yelled. “You are in contempt of court by suggesting that the court and the National Assembly had some backroom deal. How dare you make such a groundless argument?”

The chief justice said the court gave consideration to the president’s lawyers “unreasonable” request to select more witnesses, criticizing their stalling tactic. Park’s lawyers requested 39 new witnesses to testify before the court, but the court decided Wednesday to allow only nine and rejected 30.

Park’s lawyers, however, did not give up. They held a press conference after the hearing to attack the court’s neutrality.

“We are extremely shocked by Chief Justice Park’s remark,” Lee said. “Because Rep. Kweon made a TV appearance yesterday and said the ruling will come out around March 10, I was extremely sensitive. I, therefore, had to question the fairness of the court.”

He said it did not make sense that the ruling must be made before March 13 because of an additional vacancy. “Prime Minister Hwang Kyo-ahn, the acting president, must appoint the successors of Chief Justice Park and Judge Lee to go ahead with the trial,” Lee said.

Lee also hinted at the possibility that all four of the president’s lawyers will resign to protest the court’s running of the trial. He said the lawyers have to make a “bold decision” if it becomes impossible to defend their client due to the court’s rejection of the witnesses.

“We will refile our witness requests with additional explanations,” Lee said. “Of the rejected 30, at least 10 must be selected.”

Asked about the “bold decision,” Lee said, “Isn’t it obvious what bold decision lawyers can make?”

The impeachment committee led by Rep. Kweon also held a press conference to criticize the president and her lawyers. “They are making a false accusation as if I and the court had some secret communication,” Kweon said. “Talking about a ‘bold decision’ is meant to smear the reputation of the court. It is also a threat to the people.”

Kweon said the National Assembly has no plan to summon any new witness. “Since the court scheduled hearings until Feb. 9, we believe that is more than enough,” he said.

Rep. Lee Chun-seok of the Democratic Party, another member of the impeachment committee, said the president is showing that she has no intention to submit to the impeachment trial. “This will demonstrate her hidden claws as a demon,” he said.

If Park’s lawyers all resign, the trial will be stalled for a significant amount of time. Under the current law, both parties involved in an impeachment trial - the National Assembly and the president - must appoint legal representations. If Park’s lawyers’ resign, she must appoint new attorneys.

Park’s lawyers said their threat to step down is not a stalling tactic. “It is to remind the court that it must not lose fairness while stressing the need for a speedy trial,” Lee said.