James Mattis’ 1st trip will be to Korea, Japan

James Mattis’ 1st trip will be to Korea, Japan 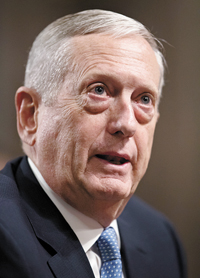 James Mattis, secretary of defense in the Donald Trump administration, is expected to make his first overseas trip to Korea and Japan next month, according to multiple diplomatic sources. Mattis is expected to hold talks with Korean Defense Minister Han Min-koo amid concerns over North Korea’s nuclear and missile provocations.

“Secretary Mattis, as his first overseas trip, is reviewing visiting Korea and Japan as his top priority,” one diplomatic source in Washington said Tuesday. “This shows that the Trump administration following its inauguration is unswervingly putting emphasis on its relationship with its two allies in Asia.”

Multiple officials said that retired four-star Marine general will visit Korea as early as next week.

“The U.S. Department of Defense, in order to prepare for North Korea’s nuclear and missile threat, is reviewing internally a visit to Korea and Japan,” said a Korean government official.

A Defense Ministry official here said Wednesday that Seoul is discussing with Washington a defense ministerial meeting between Mattis and Han to be held in Seoul early next month. However the schedule is in the process of being arranged.

There is speculation as to whether Mattis’ first visit to Northeast Asia as defense chief is a follow-up to Trump’s campaign pledge to make its allies pay up more for the cost of maintaining troops in this region.

The deployment of the U.S.-led Terminal High Altitude Area Defense, or Thaad, antimissile system to Korea, a move strongly objected to by China, is another possible topic of discussion.

During his confirmation hearing on Jan. 12, Mattis emphasized the importance of Washington’s alliances. But he pointed out that American taxpayers should not be paying a disproportionate part of shared defense costs.

In Tokyo, the new Pentagon chief is expected to hold talks with Japanese Defense Minister Tomomi Inada and pay a courtesy call on Prime Minister Shinzo Abe, according to Japanese media.

“The trip signifies that the Trump administration has made the Asia region a key security issue,” Kim Hyun-wook, a professor with the Korea National Diplomatic Academy, told the JoongAng Ilbo. “It looks like it will deploy more military assets to the Asia region. Eventually, the target is China.”