A bud of hope

A bud of hope 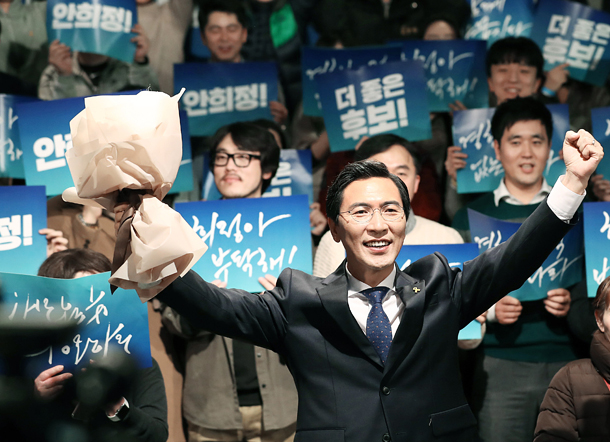 Was Bernie Sanders a poison or a remedy for Hillary Clinton? It’s a useless question now, but if Clinton had won the election, Sanders would have been the biggest contributor. Thanks to Sanders, Clinton, who had been considered to represent Wall Street, took a swing to the left.

Raising the minimum wage to $15, free college education and health care reform are some of the accomplishments that Sanders might have made possible.

South Chungcheong Gov. An Hee-jung’s bid reminded me of Sanders. Among the opposition candidates, he is the only one to take a step to the right. While he advocates conglomerate reform, he said he respects the decision of judges not to detain Samsung Electronics Vice Chairman Lee Jae-yong. While he opposes the Thaad deployment, he said he respects the agreement between Seoul and Washington.

He also said the economy should continue the legacy of the past six presidents from Roh Tae-woo. He stressed that Roh’s public concept of land, Kim Young-sam’s globalization, Kim Dae-jung’s promotion of information technology, Roh Moo-hyun’s innovative economy, Lee Myung-bak’s green growth and Park Geun-hye’s creative economy would be enough for the nation.

Governor An summed up the economic policies of the past three decades as part of an innovation-driven democratic fair market economy. While details need to be further reviewed, he said, “The citizens don’t want a free lunch,” a fresh take in the election campaign where even the Saenuri Party uses populism. An is talking about positive over negative, integration over division, succession over discontinuation, fairness over freebies. I believe that these are what a Korean politician should be speaking of today.

I don’t believe his words just as told. Politicians’ words can be political. First, some political engineers interpret that An Hee-jung is a Sanders intended for Moon Jae-in. His support base is different from that of Moon. He is based in Chungcheong province and appeals to moderates and conservatives with a leftist swing. He is also close to the non-Moon faction. An’s 4 percent rating is right at the area that Moon wants to expand to. By involving An, Moon can naturally reinforce his dominance.

Second, An’s role is to maximize the effect of the Democratic Party primary. It is likely that the next presidential election will be held in spring, and time is the key here. Candidates need to highlight their dominance and capture the advantageous position at once. The more popular An becomes, the more effective the primary will be. An uneventful primary could allow the other camp to strike back.

Third, An seems to want the party’s victory more than his own presidential bid. He is a pure-spirited activist who is willing to sacrifice himself for the greater cause. He is not likely to resist the primary outcome. Also, he can keep candidates like Park Won-soon and Kim Bu-gyeom from defecting. An has denied all three claims above and said no one would step into the ring with a plan to lose.

Even if all these analyses are true, I still support An’s political language. Dividing camps and taking side is not politics. Moo Jae-in, the frontrunner in the polls, wants to inherit Roh Moo-hyun’s spirit and follow his path. He has said, “We have to start a revolution if impeachment fails” and wants to end “pro-Japanese, dictatorial vices.” His language could get too rough and divide the nation. Even if he could become president, his presidency may fail. Who cannot be sure that Moon Jae-in’s supporters would clash with his opponents trying to bring him down in Gwanghwamun Square a year later? Then, Korea would have no future.

At the 13th candlelight protest on Jan. 21, some extremists went too far. A picture depicting Park Geun-hye naked was hung in the middle of the square. It was a vulgar way to protest. I found it just as shameful as Choi Soon-sil’s relationship with Park Geun-hye. This must not be the destination that Moon Jae-in hoped to reach with candles. The force of the square will bite anyone. Moon won’t be an exception. To prevent Korea from being divided, we need to talk about politics of unity and economy of engagement. I saw the bud of hope in An’s language. I hope he will not remain Moon Jae-in’s Sanders.


*I saw the bud of hope in An’s language. I hope he will not remain Moon Jae-in’s Sanders.