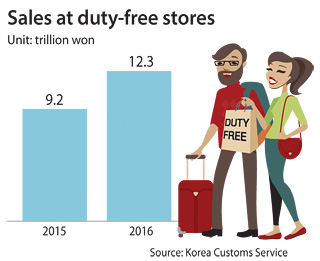 Sales at local duty-free stores rose significantly last year as cosmetics and ginseng products continue to be popular not only with Koreans but also foreigners who shopped there, government data showed.

Sales at duty-free stores rose 33.5 percent year on year to 12.28 trillion ($10.6 billion) in 2016, the Korea Customs Service said Thursday. Sales of locally-made products at the shops also jumped 43.1 percent compared to the previous year to 4.87 trillion won and accounted for 35 percent of total sales.

The government said sales for small to midsize companies that provided goods to the duty-free stores increased.

“Duty-free stores are where small to midsize companies sell their products to enter the global market and the past year’s data showed that sales of such firms have improved,” said Han at the customs agency.

Revenue at seven duty-free stores in Incheon was 2.3 trillion won. Dubai International Airport came in second with 2.2 trillion won and was followed by Singapore Changi Airport with 1.9 trillion won.