Amid strike and slump, Kia ekes out net profit

Amid strike and slump, Kia ekes out net profit 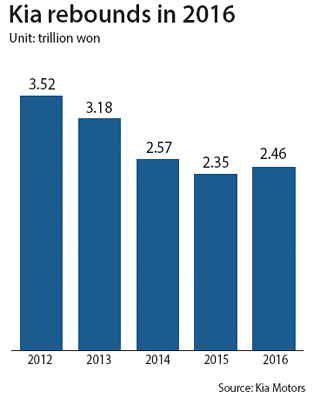 Kia Motors managed to post a profit last year thanks to new car releases and sales of its larger cars while its bigger brother Hyundai Motor saw profit plunge to the lowest in six years.

Kia said its revenue was 52.71 trillion won ($45.5 billion), up 6.4 percent year on year, and the automaker reported 2.46 trillion won operating profit, up 4.6 percent, on Thursday. The company posted profit despite facing similar business difficulties at Hyundai, such as a global economic slowdown and labor union walkouts last year.

Hyundai, which released its earnings results on the previous day, reported 5.19 trillion won in profit, a 18.3 percent plummet year on year.

The major determinant in the earnings divergent reports was business in the local market.

While Hyundai’s domestic sales fell 7.8 percent mainly due to the lack of new vehicles, Kia Motors increased sales 1.2 percent with new releases of its K7 sedan and sport utility cars such as Niro and Mohave.

“Many local consumers had been fed up with Hyundai’s older models last year,” said Esther Lim, an analyst from Samsung Securities. “Hyundai cited production delays due to labor union strikes as the major reason for its sluggish local sales but lack of change and innovation in its car lineups I think was a bigger contributor.”

“Kia Motors also suffered from labor union walkouts, but it wasn’t impacted as much,” Lim added.

The automaker’s operating profit to sales ratio fell 0.1 percentage points to 4.7 percent, marking another consecutive decline after recording 8.1 percent in 2011. The figure is even behind Hyundai’s 5.5 percent.

Also, concerns on its recently built Mexico facility bring uncertainty to its businesses this year, as the new U.S. administration, led by Donald Trump, has been pushing a protectionist policy, which involves imposing high tariffs on Mexico-made products.

“We are expecting reverse growth in the U.S. market this year,” said Han chun-soo, vice president of Kia Motors. “We will release hybrid SUV Niro in the U.S. and focus on sales promotions.”

Kia’s original plan was to sell 20 percent of the Mexico-made cars in the local market and export the rest to more than 80 countries including some in North and Latin America. Kia plans additional new releases and expanded sales of RVs. Also, the carmaker will strengthen research and development on environmentally friendly cars and smart cars installed with IT functions.