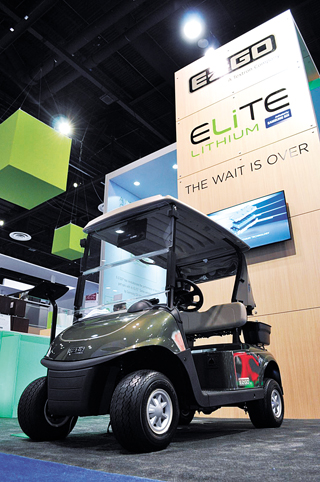 Samsung SDI will supply eco-friendly battery packs to the golf cart manufacturer E-Z-GO, one of the global top three in the market.

The products Samsung SDI is to provide are lithium-ion battery (LIB) packs. Golf carts are powered by electric batteries and the most widely used type in the past were lead-acid batteries. LIBs are an increasingly popular alternative for their eco-friendliness, smaller size and larger battery storage.

It will also have an internal system that automatically controls battery efficiency, temperature, level of charge etc.

Textron Specialized Vehicles, E-Z-GO’s parent company and a manufacturer for special cars, inked a partnership deal with Samsung SDI on Saturday at the Pinehurst Country Club in North Carolina.

Executives of both companies, including Samsung SDI President Cho Nam-seong and TSV CEO Kevin Holleran, were present at the ceremony. For Samsung SDI, which started development for golf car LIBs in 2013, this contract is the first breakthrough with a globally renowned brand such as E-Z-GO.

The first golf car to contain Samsung SDI’s battery is E-Z-GO’s new model from its ELiTE line, which is being showcased at the PGA Merchandise Show 2017 held at Orlando, the United States, from Tuesday through Friday.

The quality test was conducted at the Tijeras Creek Golf Club in California, which is famous for its terrain of high curves and slopes.

During the performance tests, the ELiTE with Samsung SDI batteries operated from 36 to 54 holes with a single charge and operated without stopping while climbing hills, said Rob Heslar, director at the Tijeras Creek.

While the small battery industry, which comprises batteries around the size of a human palm or smaller, formerly focused on information technology devices such as smartphones and laptops, non-IT devices are an expanding market for manufacturers with LIB technology. Such fields include electric gearing tools, golf carts and electric bicycles, all of which used to operate on lead-acid batteries.

“The golf car project with E-Z-GO is significant for us in that it’s a visible outcome of having developed [in advance] for a global trend from lead-acid to lithium-ion batteries,” said Youn Jun-yeol, director for Small Battery Marketing at Samsung SDI.