Park claims her rallies were bigger than vigils

Park claims her rallies were bigger than vigils 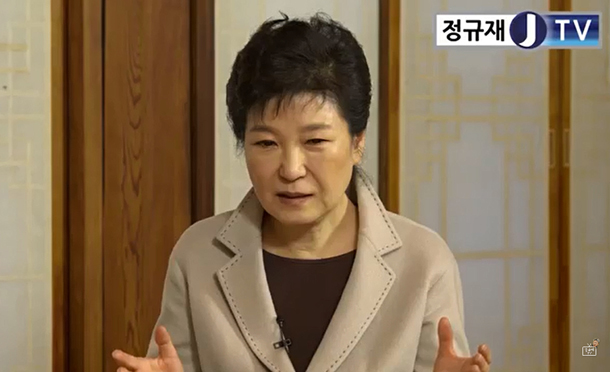 President Park Geun-hye was excoriated Thursday by the ruling and opposition parties alike for a publicity stunt to drum up sympathy as her impeachment trial continues at the Constitutional Court.

On Wednesday, Park sat down for an hour-long interview with Jeong Kyu-jae, chief editorial writer of the Korea Economic Daily and the operator of his own Internet TV show, to defend herself over allegations of violating the constitution, laws and being responsible for the deaths of hundreds of students in a ferry sinking.

Park was impeached in December for having allowed her secret inner circle, including longtime friend Choi Soon-sil, to interfere in state affairs and failed to protect lives due to nonfeasance during the sinking of the Sewol ferry in 2014.

In the interview -recorded, edited and aired through Jeong’s Internet show - Park made emotional appeals to defend herself against the scandal. She repeatedly said the accusations were a “conspiracy premeditated from a long time ago,” but did not say who was plotting the campaign against her.

Park also tried to unite her past supporters, concentrated among conservative, elderly Koreans nostalgic for the times of her late father, strongman Park Chung Hee. She said she heard that the number of participants at rallies opposing her impeachment was more than double the protesters at regular candlelight vigils demanding her resignation - a claim that is demonstrably untrue.

“I feel heartbroken to see [my supporters] having such a hard time protecting our liberal democracy and the rule of law,” she said.

After the abuse of power and influence peddling scandal first broke out, weekly candlelight rallies have taken place around the country since Oct. 29, and millions have attended. Park’s supporters organized rival protests that were far smaller.

On the same day, Park filed a defamation suit against three JoongAng Ilbo reporters over a report on her alleged involvement in a government campaign against artists critical of the administration.

Both the ruling and opposition parties criticized Park on Thursday. “[The interview] was not received well because she made comments that were very distant from public sentiment,” said Rep. Chung Woo-taik, floor leader of the ruling Saenuri Party. “It was not reasonable or appropriate.”

Park’s interview was not only inappropriate but also illegal, said Rep. Park Kyung-mee, spokeswoman of the Democratic Party.

“If she wanted to defend herself, she should have done so by cooperating with the prosecution’s investigation or attending her trial at the Constitutional Court,” she said. “Or, she could have waited for the independent counsel questioning.”

Rep. Kim Kyung-jin, spokesman of the People’s Party, also said Thursday that she should act with the dignity of the president. “No matter how deeply incompetent and corrupt she is, she, as the president of the country, must defend herself at the Constitutional Court,” he said.

Other Democratic Party lawmakers said Park and presidential friend Choi are initiating an all-out counterattack to stir up their supporters’ pity.

The independent counsel team led by Park Young-soo said Thursday that there was no rights violation such as forcing Choi to make a confession.

“This is Park’s final writhing in desperation,” Rep. Yun Kwan-seok, spokesman of the Democratic Party, said “as judgement day in the impeachment trial is approaching.” He said Park and Choi are the only people denying the scandal, while all their associates made confessions. “She is pretending to be an innocent victim before her supporters to stimulate their pity,” Yun said. “It appeared to be a tactic to influence sentiment ahead of the Lunar New Year holidays.”