Seoul mayor has decided not to run for president

Seoul mayor has decided not to run for president 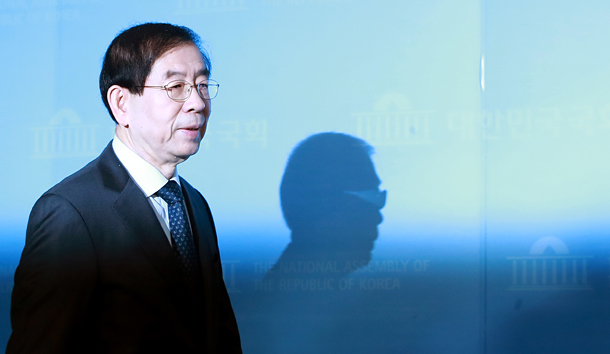 Seoul Mayor Park Won-soon walks to the podium for a press conference on Thursday in the National Assembly in Yeouido, Seoul, to announce his decision not to run for the presidential race. [YONHAP]

Seoul Mayor Park Won-soon said Thursday he will not run in the next presidential election, as his support rate has come to a standstill.

Park held a press conference in the morning to announce his decision to stay out of the race. “I decided not to run in the upcoming presidential election,” he said. “Although I will give up my path as a candidate, I will do my best as a Democrat for the party’s victory.”

He mentioned that his decision was related to his low popularity. “I have worked very hard with a desire to change the country,” he said. “But I failed to win the people’s heart.”

Park was once ranked at the top among the presidential contenders by recording 22.5 percent in June 2015, after he attacked the Park administration for its incompetence in handling the Middle East Respiratory Syndrome outbreak. At the time, Moon Jae-in, his rival in the Democratic Party, had 15.6 percent. 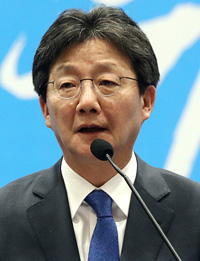 Park’s popularity, however, plummeted since then and showed no sign of rebounding. While Moon solidified his position as the presidential frontrunner with a general election victory for the Democratic Party in April 2016, Park’s approval rating continued to fall. In the Realmeter poll, conducted from Jan. 16 to 20, Park recorded 3.4 percent. Moon was ranked the top with 29.1 percent.

Park made it clear that he was not giving up the bid because of the party’s primary rule. The announcement was made as the largest opposition Democratic Party started its presidential primary process. Although the next election was originally scheduled to take place in December, an early election is possible if the Constitutional Court rules to support the National Assembly’s impeachment of President Park Geun-hye. Speculations continue to grow that the election may take place in April or May.

The Democratic Party already decided it will hold an open primary to select its candidate. It also decided to hold a runoff voting if no candidate scores a majority vote in the first round of primary.

Meanwhile, Rep. Yoo Seong-min of the Bareun Party announced his decision to run in the next presidential election. Yoo is an icon of resistance against President Park.

He was once an ally of Park, but the two parted bitterly in 2015 after she publicly condemned him for “politics of betrayal” over a political deal he brokered with the opposition. Yoo resigned from the floor leader post and failed to win a Saenuri nomination in the April 2016 general election.

He ran as an independent, was reelected and rejoined the Saenuri Party. In December, he and dozens of Saenuri lawmakers left to create their new conservative Bareun Party.

Yoo started his political career by advising Lee in 2000 for his economic pledges.

Yoo said Thursday that Ban Ki-moon, former UN secretary general, should join his party and compete in the primary. Yoo also said Ban must make public exactly how he will resolve the country’s problems on the wealth gap, inequality and irregularity.

According to the Realmeter Poll, Ban was ranked second with 19.8 percent, down from the previous week’s 22.2 percent, after a rumored split among his allies and indictment of his brother in the United States over a corruption scandal. Yoo was ranked the seventh on the list with 2.2 percent.