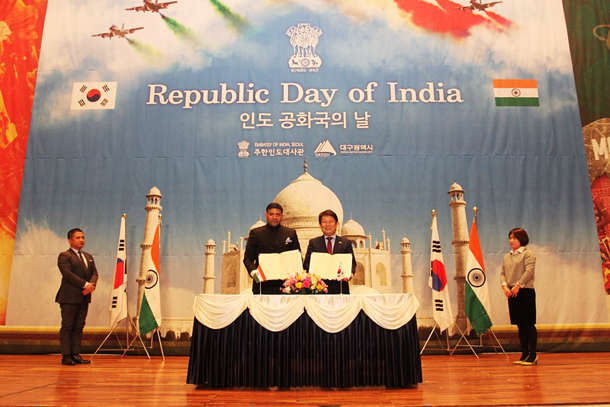 Indian Ambassador to Korea Vikram Doraiswami, left, and Daegu Mayor Kwon Young-jin hold up the memorandum of understanding they signed to boost the India-Daegu partnership on business, trade and culture during the celebration of the 68th Republic Day of India on Wednesday at Hotel Inter-Burgo in Daegu. [EMBASSY OF INDIA]

The Embassy of India hosted a celebration for the 68th anniversary of the Republic Day of India in Daegu on Wednesday, bolstering the decades-old friendship between the country and the southeastern Korean city.

“In Korea, Daegu is a special city that proves the India-Korea friendship,” Indian Ambassador to Korea Vikram Doraiswami said in impeccable Korean. “During the Korean War, Colonel Unni Nayar was deployed in Korea as a delegate of India to the UN Commission in Korea, and was killed on duty at Waegwan.

“A memorial dedicated to him was established here in Daegu,” he said. “The Embassy of India highly values the relationship with Daegu and appreciates the Daegu city administration and people of Daegu for their attention and care.”

The Republic Day is India’s national holiday to celebrate the day the Constitution of India came into effect on Jan. 26, 1950. Hosting the celebration at Hotel Inter-Burgo in Daegu, the Embassy of India and the Daegu city government signed a memorandum of understanding to boost India-Daegu cooperation on business, trade and culture in the coming years.

“There are at least three things we want to do this year with Daegu,” the ambassador told the Korea JoongAng Daily. “One is to try to put something together with textile machinery businesses in Daegu. Korea’s [textile machinery business] is one of the best in the world but it is starting to face challenging times. India can be a big support base for Korean textile companies to come back to the global market.”

The ambassador added that the embassy is discussing the possible partnership over textile industries in Korea with the Ministry of Trade, Industry and Energy in Sejong.

“Then for the chimaek [chicken and maekju, or beer] festival in Daegu, we want to introduce Indian beer and Indian-style grilled chicken,” the ambassador said. “This chicken and beer festival in Korea is probably the world’s biggest of its kind, and it’s an opportunity to showcase things we [India and Korea] like in common - we like spicy food, and we have similar kinds of lager in India, which goes well with spicy food.”

The ambassador is also looking forward to creating a cultural festival of Indian food, film and dances in Daegu.

“The festival is called Sarang, which means ‘love’ in Korean and ‘colorful’ in our language,” he said. “We want to try to bring at least one program of the festival from Busan and Seoul [to Daegu] and start expanding.”

The unique move by an embassy in Seoul to host a national holiday celebration outside of the capital city is a welcoming change to Daegu, which endured the brunt of unofficial economic sanctions from China. Qingdao, the sister city of Daegu, cancelled its chimaek trip to Daegu last minute last year, after the U.S. and Korean governments announced their decision to install a U.S.-Terminal High Altitude Area Defense antimissile system on the peninsula.

“As we all know, India, with some 1.3 billion in population and an annual growth rate of some 7 percent, is truly the new growth engine in the world,” said Kwon Young-jin, mayor of Daegu. “I am happy to say that the economic and business partnership between Daegu and India has been growing every year, too.

“There are some 250 companies in Daegu that are exporting some $230 million annually to India,” the mayor added. “And in January last year, Daegu participated in the India-Korea Business Summit in New Delhi, and agreed to boost cooperation on textile and automobile parts industries, as well as on developing smart city policies.”

The embassy’s celebration of the Republic Day of India in Daegu on Wednesday was not the first time the national holiday celebration was hosted outside of Seoul. Pohang of North Gyeongsang hosted the event last year.

“We had Pohang Mayor Lee Kang-deok visit India after the event, and some businesses based in Pohang have actually gone to India to set up partnerships,” said Doraiswami. “The Handong Global University in Pohang is giving students more opportunities to do research with India, and we have also introduced the university leadership to the minister of science and technology of India when he visited Korea. So we managed to use that opportunity to create fresh interest for India in Pohang.”

A group of executives of enterprises in Pohang will be travelling to India between March and May to set up business partnerships, an official at the Pohang city government’s business investment bureau confirmed with the Korea JoongAng Daily.

And the unique partnerships forged over India’s Republic Day are likely to branch out to other cities and local districts, as well.