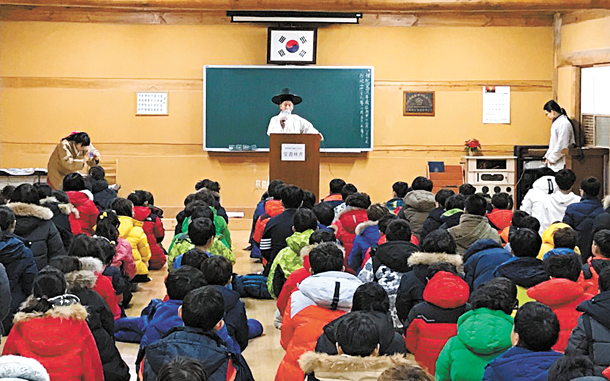 Many would agree that resisting the urge the hit others whilst angry is common courtesy and the sign of a mature adult. But this kind of self-control has not been seen from some people in their 20s and 30s recently, especially from those of wealthy families. Earlier this month, Hanwha Group chairman’s son got into a brawl at a hotel bar, while another wealthy business owner’s son caused a commotion and was violent on a flight last month.

After seeing these stories make headlines, more parents of young children have started to wonder if their kids are too spoiled and do not know how to be nice and control their temper when they don’t get what they want. Thinking they lack the time to teach their kids about proper etiquette in social settings, many turn to others for additional training outside of school.

One of the institutes many parents turn to is Chenglim Seodang in Chunghak-dong, South Gyeongsang. The school, known for teaching values handed down for centuries and Confucius teachings that focus on proper manners, has been welcoming students not just from the local region but also from the Seoul metropolitan area, which is about five hours away by car. Students mingle with others they have never met before, and learn how to cooperative with each other as they study, eat and play together. The school has recently seen an increasing number of parents of students in elementary and middle school signing their children up for the program.

Parents who value the importance of teaching their kids proper manners do not hesitate to spend big bucks on classes, regardless of their financial situation. The school offers a variety of classes of different lengths and prices. The cost for the shortest, one-week class starts at 450,000 won ($386.65) and the price for the longest four-week class goes up to 1.1 million won. All parents enrolling their children in the programs also have to pay a non-refundable deposit of 100,000 won when they register.

While some of these parents don’t mind travelling down to the far-away institute, there are some other facilities in Seoul that are much closer. Super Camp Korea in Jung District, central Seoul, has offered a variety of programs for the past 10 years to teach young students how to live harmoniously with one another.

They recently renamed their programs and now call them Inseong Camp. Inseong in Korean refers to characteristics a human being ought to have, and the word has often been used in the media whenever there is a public brawl by troublesome kids. Parents often ask the institute if it offers classes that teach “inseong,” hence it changed the name.

Lee Mi-sun, an instructor at the school for the three years, said that parents are held responsible. “Some parents tend to focus on their children’s academic achievement more than anything,” said Lee.

She also added that the frequent use of smartphones has kept young people from developing some people skill. So, the teachers at Super Camp Korea ask students to put their phones away during the class.

“At first, the students feel awkward interacting with one another when they are away from their safe havens easily found in their smartphones,” Lee said. “But after a while, the students start to show more confidence in socializing with others through a variety of activities done in class.”

The institute offers one six-day program for 1.35 million won, but if a group of five signs up together, each participant can get a 100,000 won discount.

Not all programs that foster social skills come with a high price tag. To help students regardless of their parents’ financial status, many of the district offices in the Seoul metropolitan area run similar programs for free.

Incheon is one of the cities that has set a curriculum to provide classes that teach proper manners. Yeonsu District Office in Incheon has been running a program dubbed Yejeol Gyosil, which translates to a class that teaches yeojeol, or proper decorum. Here, instead of hiring teachers, the district office invites young students to its senior center where they spend time with the older members of the community. By having close contact with the elderly who these young students don’t often come across in their everyday lives, they get to learn how to behave around strangers and how to socialize with people they are not familiar with. Students usually join the class during their summer and winter vacations.

The office has been operating the program for the past 10 years. It used to have about 10 students in each class, but now, due to greater demand, it had to put up to 20 students in one class. Each time the office opens a session for the vacation period, up to 150 students sign up.

Another expert who has been in the industry for over 13 years in Incheon, said it is better to start teaching people early about good manners. Yu Mi-na, the director of a child welfare center called Exciting Classroom in Gyeyang District in Incheon, also said that she is now thinking about teaching young students how to make tea to teach patience. She believes that such programs can help young people control their tendency to go “too wild” when they get older as students tend to be more “polite” when they are younger.

Choi Hyo-jung, a social worker at Ggummaeul Community Child Center for 14 years, also agreed about the importance of early etiquette education, adding that it used to take her about three months to train a child to the level she’s happy with but now it takes a year or even longer.

Why does it take longer to teach manners to children these days? Kim Mi-ran, head of the training team at Gwanak Community Child Welfare Center, said one of the reasons is found by observing the behaviors of the child’s parents.

“No matter how often we tell children what’s appropriate, the training becomes useless if their parents don’t behave according to the standard that teachers set for their children,” Kim said. “Children just pick up what their parents do in certain situations.”

Based on survey results from the Korean Educational Development Institute released in 2014, teachers and educational leaders at elementary, middle and high schools across the country and parents with children in school have said since 2012 that educational programs on proper manners are needed to further developed as the current system doesn’t provide enough.

Another survey by the same institute also pointed out that 21.2 percent of over 13,000 respondents cited a lack of time give attention to their children due to their busy work schedules as hurdles that prevent children from picking up proper manners from their parents. The use of the cell phones and computer games were mentioned as the second biggest hurdles.

The National Assembly has also taken note of the situation and its new so-called Personal Education Promotion Law went into effect in July 2015. This law requires teachers at school to give a class on etiquette. Since then, each school has been coming up with its own ideas to provide additional coaching session, according to a local elementary school teacher who wished to be identified as Choi.