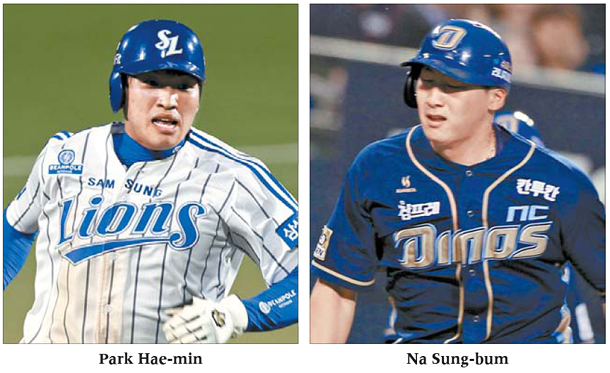 Na Sung-bum of the NC Dinos and Park Hae-min of the Samsung Lions may be outfielders for rival baseball teams, but the two are also best friends.

Their friendship began in 2011 at the Panama Baseball World Cup, where Korea was fielding a team with mostly amateur players. At the time, Na was a student athlete at Yonsei University and Park at Hanyang University. They knew each other by name and were in the same class year, but they never had the chance to officially meet.

Suffice it to say, they became fast friends, and a few years later, both made it to the country’s top league, the Korea Baseball Organization (KBO).

Na was known for his exceptional defense and offense skills. Lee Jin-young, one of Korea’s top right fielders, once said of Na, “He’ll become an outfielder who will lead the national team in the near future.” Since joining the KBO in 2014, he has marked a 0.300 hitting average with 100 runs batted in and hit 30 home runs in his first year, 28 in his second and 22 in his third.

Neither of them made the final cut. Instead, the outfielder team comprised Choo Shin-soo of the Texas Rangers, Kim Hyun-soo of the Baltimore Orioles, Choi Hyun-woo and Lee Yong-gyu of the Kia Tigers and Min Byung-hun of the Doosan Bears.

An opportunity opened up after Kim and Choo were denied by their Major League Baseball teams from playing in the Korean national team. Kim was replaced by Son A-sup of the Lotte Giants, leaving Na and Park to compete for Choo’s spot.

In the end, though, neither of them made it to the roster. Na was in poor physical condition, and Park was passed over because there were already too many left-handed outfielders.

“I’m not so sure about the [2018] Asian Games since I have to fulfill my compulsory military service,” Park said. “But if I do make it to the team, I will have to trust Sung-bum, who has more experience on the national team.”