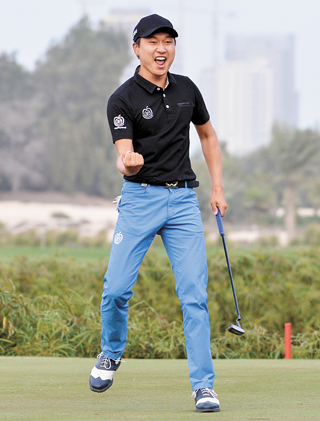 Wang Jeung-hun celebrates his victory after the playoff round of the Commercial Bank Qatar Masters tournament at the Doha Golf Club in Qatar on Sunday. [XINHUA/YONHAP]

Wang won the tournament after it went into a playoff round. He finished regulation play at 16-under par tied with Joakim Lagergren of Sweden and Jaco Van Zyl of South Africa.

Wang had entered the final day of the tournament with a three-shot lead but was caught on the back nine when he made his first bogey of the day on the par-4 14th hole. He managed a comeback with a birdie on the par-4 16th hole, only to make another bogey on the 17th hole, dropping him back to a three-way tie against Lagergren and Van Zyl and throwing the tournament into a playoff round.

In the first playoff hole, the par-5 18th hole, Wang stuck his chip 3 feet of the hole and successfully made an up-and-down for a birdie to win the event. Van Zyl and Lagergren made par.

It was Wang’s first win in eight months and first of the 2017 season. He won his first two European Tour events - the Trophee Hassan II and AfrAsia Bank Mauritius Open - in May. Two back-to-back wins during his 2016 season allowed him to win the Sir Henry Cotton Rookie of the Year Award.

Wang’s world ranking now moves from 60th to 39th. If he stays within the top 50 during the week prior to the Masters Tournament in April, Wang will earn an invite to play in the major championship event.