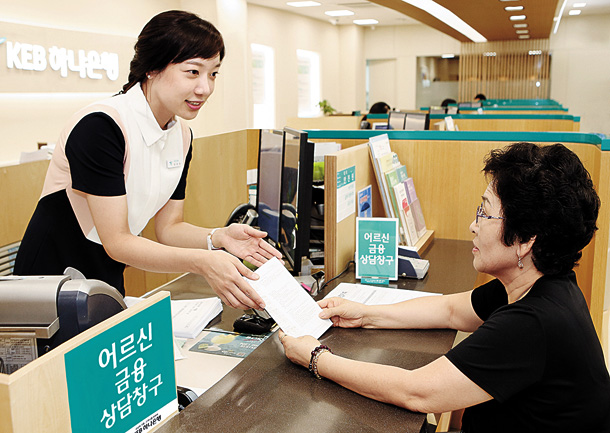 An elderly customer gets a financial consulting from KEB Hana Bank employee at a window specially catered to older clients. [keb hana bank

Once, visiting a bank was as easy as dropping by a supermarket, says Song Kyung-hee, a 60-year-old woman, but one branch after another started closing down with the rise of online and mobile banking services.

Now, it takes her 30 minutes by car to get to the nearest bank that she uses to make transactions.

Digital banking has become something of the norm for many, but adults over 60 largely are lagging behind in accepting the latest technology.

While banks continue their efforts to move customers to digital platforms aimed at reducing their costly branch networks, older people who are not apt at using digital devices become marginalized, which poses a challenge for major commercial banks in the mobile push. 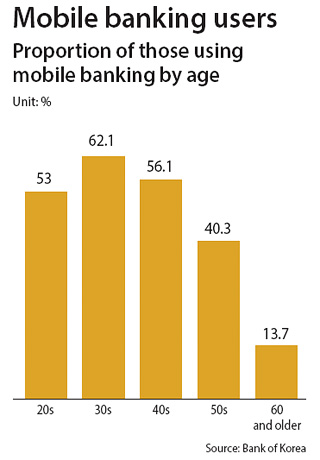 The number of mobile banking users rapidly increased to reach over 11 million or 22.8 percent of the entire financial service users last year, according to Dgieco, a research institute run by carrier KT. That means now one out of five Koreans use or at least installed a banking application.

But a closer look reveals that the usage rate has huge discrepancy by age. For instance, over half of those in 20s, 30s and 40s use mobile banking, but only 13.7 percent of people over 60 sign up for the service last year, according to the Bank of Korea. A complex identification process on the online and mobile platforms only provides a further barrier.

“I once tried to install a mobile banking app but gave up,” said Song who lives in Ulsan, South Gyeongsang.

“The process didn’t go smoothly and when I touched a wrong button, it all goes back to the first stage and I needed to start all over again,” she continued, “So I thought it is better to just visit the bank even though it takes time.”

As banks focus on mobile-based services, they churn out a number of different apps, another hurdle for senior adults to figure out which app they should install.

The country’s four major banks - Shinhan, KB Kookmin, Woori and KEB Hana - have over 10 apps each on Google’s Play Store.

“Whenever I tried to install banking apps I felt like walking a labyrinth,” said Kim Hyung-wook, a 79-year-old man.

“I have a bank account at Shinhan Bank, and when I searched Shinhan there were over 20 results,” he said.

Still, banks perceive the shift towards digitization as the irreversible current, shutting down branches and staff. In 2016 alone, the five largest banks - Shinhan, KB Kookmin, Woori, KEB Hana and Nonghyup - closed a total of 177 branches last year. The number is three times higher than 2015 when 58 brick and mortar banks stopped operating, according to Korea Federation of Banks. The downsizing of the branch network translated into a massive layoff of bank staff.

Those hit hardest are bank tellers who directly interact with customers. At KB Kookmin, over 1,000 tellers left their position through a voluntary retirement program.

The move towards mobile and internet-based transactions, however, will likely only accelerate as the financial authorities seek to bolster digitalized financial services from cost-efficient perspective.

The Financial Supervisory Service will ban banks from issuing a bankbook to new customers, starting September. Older people often use a bank book, a paper book used to record bank transactions on a deposit account, to keep track with their transactions.

The financial watchdog said that the measure is intended to save costs of issuing and managing inactive bankbooks. With the increased use of electronic banking and card use, the Bank of Korea declared that it will push forward “a coinless society” as a prelude toward cashless society.

The central bank will introduce a system where customers at convenience stores can deposit loose cash into reloadable cards like T-Money, public transit passes and gift cards.

At the crossroad, banks try to find a middle point by providing services tailored for the elderly clients.

Major banks including KB Kookmin and KEB Hana operate a counter that caters to older customers.

“If you go to a bank, you will find out many users are older people,” said Hwang Tae-byung, a public relations official at KEB Hana.

“Since young people prefer online or mobile banking, they rarely visit a bank. So, we thought that we need to set up a booth for older people to quickly handle the services.”

Shinhan and KB Kookmin also released an app for older clients that is fitted with bigger fonts and easier interface. Woori Bank operates a separate telephone counseling for clients over 65 where tellers speak more slowly. But not all banks scale down branches at the expense of seniors’ inconvenience.

Regional banks based outside of Seoul are more attuned to the needs of older clients since they took up a larger share in population in other cities.

North Jeolla has one of the largest populations of people over 65 - 18.5 percent of the total, higher than the average at 13.1 percent.