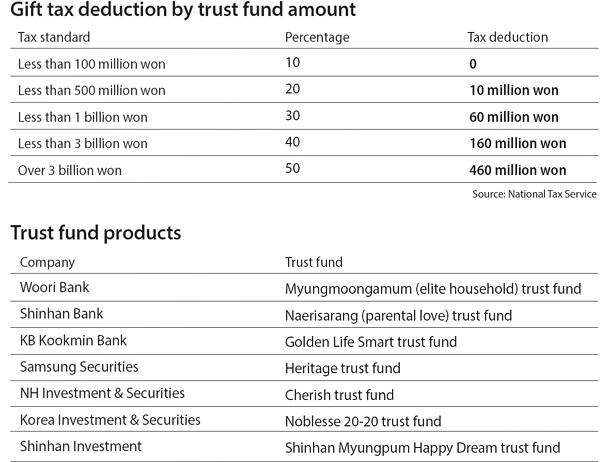 After the government announced earlier this month that it would revise the tax code on inheritance to reduce deductions, many older Koreans have been racing to open up trust funds for their children and grandchildren.

One retiree surnamed Chae recently opened a 2 billion won ($1.7 million) trust fund for his grandchild, hoping to take advantage of current tax deductions before the government decides to revise the system. “More of our customers began asking us about trust funds and how they will turn up in the future,” said an employee at Korea Investment & Securities. “Many of them eventually create trust funds.”

When parents create a trust fund at a securities company or bank, the company invests the money in government bonds. It then transfers the principal and interest into the accounts of the children or grandchildren twice a year. What makes the fund most compelling is the deduction on the gift tax, which can often be a headache for the wealthy.

For instance, when parents try to give their children 1 billion won in a lump sum, they have to pay the government 209 million won in taxes. But if the same amount of money is given through a trust fund, the amount of taxes could range from 65.8 million won to 128 million won, depending on the duration of the fund.

“It’s not possible for the recipient to file the gift tax every time he or she receives the principal or interest for 10 years, so they pay the entire amount of taxes at once when they first receive the principal and interest,” Kim added.

For many parents, trust funds are a tax-saving option, and it’s the reason behind their growing interest. The government plans to unveil a revision to the tax code by the end of February that will likely reduce the deduction amount. “We will have to see by how much the deduction percentage will go down from the current 10 percent,” an official from the Ministry of Strategy and Finance said.

Analysts at securities companies believe the deduction amount could fall to as low as 5 percent, which is why many wealthy Koreans are rushing to create trust funds to take full advantage of the current system before it is too late.

At the moment, the size of the trust fund market nationwide is about 500 billion won, with the average amount per fund standing at 1.5 billion won. It is a popular option for more conservative investors with cash to spare, since the majority of the funds are invested in government bonds.

“Considering it has to be a long-term investment and that we cannot incur losses since the tax has to be paid in advance, we have no option but to invest the fund into government bonds,” said Park Deuk-min, a director who specializes in trust funds at NH Investment and Securities. “Trust fund yields are about 3.5 percent minimum.”

But those looking for sizable returns or more aggressive investment strategies, trust funds might not be the most suitable option.