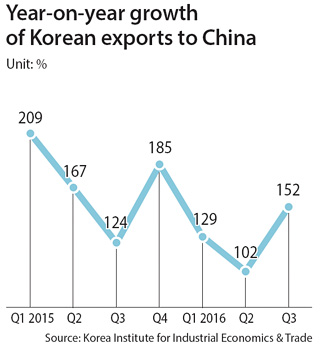 China’s biggest tax overhaul in a generation, which went into effect in April, raised concerns among many exporters in Korea about declining exports, but the amount of Korean goods shipped directly to Chinese consumers through e-commerce sites increased 127 percent in the April-September period from a year earlier, data from a state-run think tank showed Monday.

In particular, direct purchases of Korean cosmetics by Chinese consumers surged 167 percent during the second and third quarter from a year earlier, and clothing purchases also climbed 47.3 percent over the same period, according to the Korea Institute for Industrial Economics & Trade. Food products, though, shrank 27.6 percent.

The impact of the Chinese government restricting its consumers from purchasing goods from overseas appears to be negligible, said Kim Suk-kyung, a researcher who led the study. “Direct delivery of export goods is still an attractive means of shopping for Chinese consumers who wish to enjoy tax benefits, and Korean e-commerce operators need to come up with measures to expand such a consumer base,” Kim said.

Before China revised its tax policies for imports through cross-border e-commerce, Chinese consumers who bought goods online from abroad went through customs according to “personal postal articles” tax regulations. This applied to orders worth less than 1,000 yuan ($145).

If the order value exceeded 1,000 yuan, the goods had to go through customs, and tax rates varied depending on the types of goods, from 10 percent to as high as 50 percent. There was no limit on the annual total for each consumer.

The new policy raises the ceiling to 2,000 yuan for each transaction, but it also limits people to orders of 20,000 yuan per year. In addition, imports are levied an integrated tax with import tariffs, a value-added tax and consumption tax. Currently, the tariff rate is temporarily set at 0 percent.

According to Kim, Chinese consumers’ direct purchases from overseas totaled some 44 trillion won ($37 billion) in 2015 after increasing more than 100 percent year on year. China is Korea’s biggest e-commerce export market, accounting for 68.7 percent of all countries as of 2015, up from 46.9 percent a year earlier.

Cosmetics took up the largest portion, at 82.1 percent, followed by clothing with 11.5 percent and food products with 1.4 percent in 2015.

Chinese consumers also chose Korea as the third-most preferred destination for buying goods after the United States and Japan.

The China E-Commerce Research Center predicts the number of Chinese shoppers buying directly from overseas online will increase from 18 million in 2014 to 35.6 million by 2018.

Kim noted that these shoppers prioritize shipping speed and product quality and advised Korean e-commerce operators to better optimize their logistics system for China and earn various certificates issued by the Chinese government to earn favor.