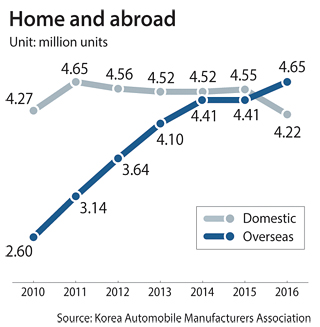 The number of cars manufactured domestically fell to a six-year-low in 2016 as automakers opted for overseas production to take advantage of lower labor costs and boost their global presence.

It was the lowest level since before 2010, when the seven manufacturers churned out 4.27 million cars. Since then, the number has consistently risen except for in 2015.

Korean cars assembled outside of the country, on the other hand, outpaced domestic production for the first time last year.

A total of 4.65 million cars were manufactured in overseas production plants including the United States and China, recording a 5.5 percent year-on-year jump.

The number of Korean cars produced outside the country has been growing steadily since the early 2000s when domestic carmakers started to target the global market. Overseas production lines are now more attractive than domestic because of lower labor costs and strategic locations for export. Overseas production, which was below 2 million in 2009, doubled in less than 10 years.

According to data from Trading Economics, the average wage in manufacturing in Korea is 4.7 times more than in China.

Domestic production particularly shrunk last year thanks to strikes by the strong labor union of Hyundai Motor, the nation’s top automaker, which resulted in a loss of an estimated 3.1 trillion won and production of 142,000 cars. The union, which called for its first full strike in 12 years, was asking for pay raises and more benefits.

Hyundai Motor and its sister company Kia Motors are poised to boost overseas production even further this year.

Hyundai Motor completed its fourth Chinese plant last October in Changzhou. The new plant, which is capable of producing 300,000 cars annually, will go into full operation this year.

Its fifth Chinese assembly line is scheduled for completion this year in the southwestern city of Chongqing. It is also capable of making 300,000 cars a year.

Kia Motors is also determined to lessen its dependency on domestic production.

It opened its fourth overseas plant in Mexico last year, which is capable of producing 400,000 units a year. It manufactured some 107,500 units in the last three months of 2016. The Mexican automotive market has been growing at an average rate of 10 percent annually since 2010.

It remains to be seen how threats from the new Donald Trump administration to stop manufacturing cars in Mexico will effect Hyundai Motor Group.

Approximately 80 percent of production from Kia Motors’ Mexico plant was originally scheduled to be exported to the United States.